'Tis The Season: How To Survive Your Office Holiday Party 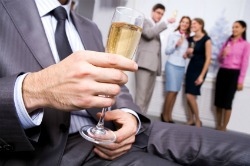 Holiday office parties are making a come-back this year, reported the Charlotte Observer, with some 58 percent of 2,600 employers questioned in a CareerBuilder.com survey indicating they plan to host one.

That's an increase over the 52 percent in 2010. However, the come-back could be modest in approach.

"Most of these parties aren't going to be giant bashes," Ryan Hunt, a career advisor with CareerBuilder.com, said to the Charlotte Observer. "They're still modest."

But, when it comes to that holiday office party, are there specific ways to act? Should you stay away from alcohol or imbibe just a little? It is OK to discuss work topics or not head there at all? A variety of suggestions are being thrown about this holiday season and the few listed below could help you to enjoy yourself at your office party without making an impression you'd rather forget.

One thing to do is to decide in advance whether you are going to drink at the office party, according to Fox Business. Try to find out what the higher-ups in the office are doing as far as drinking and take cues from them, suggested Dr. Gregg Jantz, founder of The Center for Counseling and Health Resources.

"A lot of times people don't realize they are being judged and monitored in some instances at a party," Jantz explained.

Even if your bosses and colleagues are drinking more than you might consider acceptable, you can still make the decision to limit yourself.

"These people will still be your boss and colleagues the next day," Anna Post, great-granddaughter of etiquette expert Emily Post, said in The Wall Street Journal. "Be careful about how much you drink and think about the pictures of you that could be posted on Facebook."

Also, be careful about what you talk about at the office party. According to Fox Business, Jantz advised party-goers to stay away from hot-issue topics, which most people already know as office gossip, politics and religion, but he also had another item to add on the don't-go-there list.

"Do not talk about personal issues," he said. "Be very alert as to what you are saying."

The Toronto Star also emphasized that you should not complain about your job at the office party.

"Don't make the mistake of believing that because you are off the premises your conversations are off-the-record," etiquette specialist Louise Fox said in The Toronto Star.

One way to do this is by finding industry news to discuss in advance, Charles Purdy, senior editor at Monster.com, advised. But, even then, keep it brief.

"You should be able to talk about what you are working on in a couple of minutes, but also have non work-related topics at hand," he said.

Networking at the office Christmas party also entails reaching out to office colleagues you don't typically interact with. This can help to build connections that can be beneficial back in the office.

While there are a number of other ways to make the most out of your office holiday party, the best tip is to remember that your actions can either help to tarnish or polish your professional reputation. Simply being aware of what's going on around you could make your holiday party a big success.

Career and Education News
Home >
News>
'Tis The Season: How To Survive Your Office Holiday Party