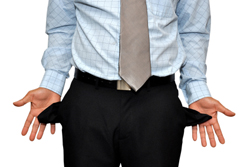 As the first of many moves to reduce the nation's deficit, President Obama proposed a two-year pay freeze for all civilian federal workers on Monday.

According to The New York Times, the pay freeze, which would require congressional approval, would cover 2011 and 2012, but would save billions over many years. Jeffrey Zients, deputy director of the Office of Management and Budget and the government's chief performance officer, said the freeze would save $2 billion in the current fiscal year, which ends in September 2011. However, he added that it would save $28 billion over five years and more than $60 billion over 10 years.

Although the president said such difficult sacrifices were necessary, he also made it clear that he did not take the matter lightly. "The hard truth is that getting this deficit under control is going to require some broad sacrifice and that sacrifice must be shared by employees of the federal government," said President Obama. "I did not reach this decision lightly. This is not just a line item on a federal ledger. These are people's lives."

Bloomberg reported that the government announced a deficit of $1.3 trillion in fiscal 2010.

Many argued that the federal pay freeze was inevitable and long overdue. The Wall Street Journal noted that Republicans have been pushing for such a freeze for months and have also called for more aggressive moves such as unpaid furloughs to cut federal salaries.

"A federal pay freeze was inevitable given the politics of the deficit and the limited pay increase that private sector workers are receiving," said Stan Collender, a former congressional budget aide. Furthermore, he added, "Anyone who thinks federal workers will be the only ones to feel the impact of deficit reductions is seriously misreading the budget tea leaves."

Others, however, argued that the inflated federal salaries are a myth and that the savings will barely make a dent in the nation's sky-high deficit. John Gage, president of the American Federation of Government Employees, told The New York Times that a typical border patrol officer earns $34,000 a year and a nurse assistant makes $27,000 annually.

"It's superficial. People in this country voted for jobs and income. Sticking it to a V.A. nurse and a Social Security worker is not the way to go," exclaimed Gage.

The New York Times pointed out that the pay freeze is a symbolic gesture to alleviate public anger over weak economic recovery, high unemployment and rising debt. According to The Wall Street Journal, President Obama hopes that this move will create a "bipartisan conversation about our future" and urged both parties to work together for long term progress.