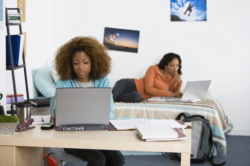 According to Daily Finance, the average student at a four-year college spends 14 hours a week studying outside of the classroom, whereas the average student in 1961 spent 24 hours per week; a decline of 42 percent. The Boston Globeadds that the trend holds true across all four-year colleges and affects students of all demographics. "We're seeing it at liberal arts colleges, doctoral research colleges, masters colleges. Every different type, every different size," says Babcock.

The Washington Postreports that the decrease has been gradual and the cause is unclear. Between 1961 and 1981, study time declined about eight hours per week, and about two hours per week between 1988 and 2004. This shows that most of the decline happened before the rise of the Internet and Facebook, indicating that mass media and technology may not be the culprits.

According to the The Boston Globe, a survey by the Cooperative Institutional Research Program shows that the trend may have started in high school. In 2009, nearly two-thirds of high school seniors failed to study six hours a week. This number has been steadily declining since 1987.

Critics of the study say the data is misleading because students live very different lives today. John Bravman, vice provost for undergraduate education at Stanford University argues that today's students are too busy. "I was a student here from '75 to '79. I was reasonably engaged in things. But I had so much free time compared to students today. They do so many things--it's amazing," he says.

Other skeptics believe that modern technology has made students more efficient when they finally do sit down to study. Before computers and the Internet, students worked with typewriters and library books, which significantly adds time when writing a term paper. "A student doesn't need to retype a paper three times before handing it in. And a student today can sit on their bed and go to the library, instead of going to the library and going to the card catalog," says Heather Rowan-Kenyon, an assistant professor for higher education at Boston College.

Furthermore, Babcock and Marks suggests that both students and teachers try to do as little as possible. Marks argues that "to make a tough assignment, [professors] have to write it, grade it. Kids come into office hours and want help on it...there is no incentive in the system to encourage effort".

Murray Sperber, a visiting professor at the University of California Berkeley, blames the advent of course evaluations. He states that although evaluations were a noble thought, they have created a "nonaggression pact", where professors--particularly those seeking tenure--go easy on assignments so that students will give them glowing course evaluations.

However, a 2008 survey of more than 160,000 University of California undergraduates cited depression or emotional stress as the second most common interference with studying. The number one obstruction was that students simply did not know how to study.

Although the data has already sparked discussions among faculty members across the nation, Marks argues that the findings may not be a bad thing. The Boston Globe points out that hours spent studying is not the goal of an education. It also is not the only way to determine one's learning abilities or the likelihood of landing a job after college. Marks states that the employers are generally more interested in whether or not an applicant graduated and is able to meet deadlines and work within a bureaucracy.

"What happened to studying? You won't hear this from the admissions office, but college students are cracking the books less and less," boston.com, July 4, 2010, Keith O'Brien