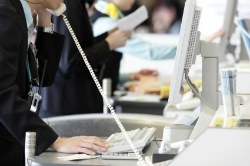 As the economy improves, the travel and tourism industries have started to add jobs.

As reported by The New York Times, according to David Huether, senior vice president for economics and research for the U.S. Travel Association, the travel industry added an average of 16,000 jobs a month in the first half of 2011. In the second half of the year, new jobs in the industry slowed to an average of 2,000 a month. In all, the travel and tourism industry has gained 224,000 jobs since December 2009.

"Clearly, the travel and tourism industry suffered pretty heavily during the downturn," said Adrian Cooper, chief executive of the London-based Oxford Economics, who was quoted by the Times. "Now we're seeing an improvement in jobs in travel and tourism."

"Supporting good-paying American jobs that cannot be outsourced abroad, the travel industry has created jobs at a faster rate (2.9 percent) than the rest of the economy (2 percent) since the overall employment recovery began in March of 2010," said David Huether, U.S. Travel Association senior vice president of economics and research, who was quoted by Travel Blackboard. "Increasing travel to and within the United States is a key ingredient to providing the job opportunities for the 13 million Americans who continue to be unemployed."

Such job opportunities are undoubtedly what prompted President Obama's plan to boost tourism, which he announced last week from Disney World in Florida. His initiative would make it easier for tourists to visit, especially those hailing from China and Brazil.

"Every year, tens of millions of tourists from all over the world come and visit America," Obama said in his speech, as quoted in Overhead Bin on msnbc.com. "And the more folks who visit America, the more Americans we get back to work."

Travel experts were thrilled with the president's speech. "Tourism dollars represent a major chunk in the gross national product in the country we live in," said Jay Caulk, general manager of the Florida-based The Travel Experts, who was interviewed by Overhead Bin. "It's most necessary to keep that income coming in. I applaud him for doing this."

He noted that tourism is a "wide-reaching octopus," affecting jobs in hotels, transportation, and entertainment.