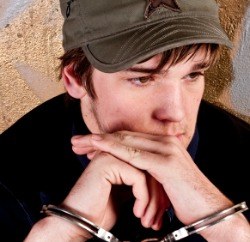 Parents do their best to raise their kids to be rule-abiding citizens, but being a teen troublemaker might have some unexpected benefits. New research shows that teenagers who engage in moderately illicit activities are more likely to become successful entrepreneurs later in life than their straight-laced peers.

According to The Wall Street Journal, that is what economists Ross Levine and Yona Rubinstein found in a working paper published by the National Bureau of Economic Research. Levine and Rubenstein used data from the March Supplements of the U.S. Census Bureau's Current Population Survey and the National Longitudinal Survey of Youth to find out what it takes to become an entrepreneur. They assessed the cognitive, noncognitive and family traits of self-employed individuals with incorporated businesses and compared them to salaried workers and those who are self-employed with unincorporated businesses.

The economists noted that making the distinction between incorporated and unincorporated businesses was key. Previous research on entrepreneurs looked at the two groups as one, but Levine and Rubenstein argued that individuals who go through the lengthy and costly process of making one's business a separate entity under the law shows agency to start a profitable venture, which is the true meaning of an entrepreneur and separates a hot dog vendor from Michael Bloomberg.

As The Wall Street Journal reported, the study showed that entrepreneurs with incorporated businesses were three times more likely to be troublemakers growing up than salaried employees. These individuals often engaged in moderate criminal activities such as shoplifting, skipping school and marijuana use. Additionally, research showed that this group exhibited greater self-esteem, were more educated, did better on learning aptitude tests and were more likely to have two high-earner parents than individuals in other employment categories.

"Of course, you have to be smart, but it's a unique combination of breaking the rules and being smart that helps you become an entrepreneur," explained Levine in The Wall Street Journal.

According to Popular Science, previous research has found a connection between illicit teenage behavior and entrepreneurship. In 2009, researchers at Arizona State University and the National University of Singapore interviewed 165 American men and found a link between moderate teenage rebellion and entrepreneurship as an adult. Later, a study by researchers in Germany and Sweden expanded on that study and found that individuals who had founded their own businesses were more likely to have played hooky, disobeyed their parents, cheated and shoplifted as adolescents.

"We think that it could be the early entrepreneurial spirit," said lead author Martin Obschonka of the University of Jena in Germany to Popular Science.

Interestingly, Popular Science noted that Obschonka's study also found that teenage troublemaker tendencies were not associated with adult entrepreneurship among females. Another important note was the fact that teens who committed severe crimes were not more likely to be entrepreneurial. The Wall Street Journal explains that successful entrepreneurship requires a balance between risk-taking and sound judgment.

According to The Wall Street Journal, Levine and Rubenstein found that salaried workers who left their jobs to start their own incorporated businesses earned more per hour than other employment types as well as more than what they previously earned as salaried employees. They did, however, work more hours.

"Smart and Illicit: Who Becomes an Entrepreneur and Does it Pay?" nber.org, August 2013, Ross Levine and Yona Rubenstein