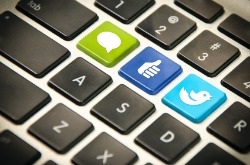 Though the practice may make many feel uneasy, monitoring of social media networks at both school and employment has become more commonplace. Two universities have followed suit and will begin requiring student-athletes to permit monitoring software on their social media accounts in order to participate in sports. The software will alert a coach or university official if certain words deemed inappropriate are used.

According to CBS Sports, the University of Kentucky and the University of Louisville have banned the use of certain words by their athletes on social sharing sites such as Twitter. Close to 500 words or phrases have been banned by each of the schools. While some of the forbidden words on the list may seem reasonable, others don't have a clear reasoning behind them.

The schools use third-party tracking software to monitor accounts, including Facebook and YouTube. Centrix Social and UDiligence are used by the University of Kentucky and the University of Louisville, respectively, according to Yahoo! News. Several other schools nationwide also use the software, which costs approximately $6,000 a year.

As reported by the Courier-Journal, student-athletes sign a social media monitoring agreement with the sports program at their school and then monitoring starts.

At the University of Louisville, for example, the head coaches of the various sports programs make the decision about whether to monitor social media use. Athletes in baseball, diving, golf, swimming and several other sports are monitored, but those in football and men's basketball are not, according to the Courier-Journal. At the University of Kentucky, all athletes are required to participate.

"I feel like it's OK for (the coach) to monitor (student-athletes) to make sure they're not representing the university in a bad way," said Muhammed Saisullah, a 2011 University of Kentucky junior football player, in the Courier-Journal. "Monitoring, I think it's pretty smart."

However, not all are in agreement about this and that includes Washington D.C. digital media expert and attorney Bradley Shear, who decried the monitoring techniques as "unbelievably outrageous" and "clearly unconstitutional." The ACLU of Kentucky also indicated it believes the social media monitoring is an abridgement of students' freedom of speech.

Still, some point out that the schools are monitoring public information, which is not a violation of privacy.

"It's not what you could say is an invasion of privacy or anything, because you're not looking for things in a private setting, only things in a public setting," argued senior associate athletic director Kenny Klein in the Courier-Journal.