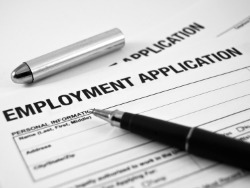 The recent cold weather that hit most of the nation seems to have had a significant impact on job growth in the last month of 2013.

According to USA Today, the Labor Department's December jobs report showed that after months of strong gains, the U.S. economy added just 74,000 jobs last month, a figure significantly lower than what economists predicted. Projections by economists varied from 100,000 to 250,000, reported Bloomberg. Additionally, economists had forecast the unemployment rate to stay at 7 percent, but instead it dropped to 6.7 percent -- the lowest it has been since December 2008. The decline, however, is primarily due to 347,000 people leaving the labor force. The labor force participation rate, which is a measure of working-age Americans who have a job or are looking for one, was 62.8 percent last month, the lowest it has been since October 1978.

As reported by Reuters, the private sector accounted for all the job growth last month, but those gains were offset by losses in construction and manufacturing, which lost 16,000 and 9,000 jobs, respectively. These decreases are likely to be a result of the unusually cold weather that crippled much of the nation. However, other sectors that are less affected by weather also saw declines, noted The Wall Street Journal. Government payrolls declined by 13,000 last month and the health care sector, which has experienced steady growth for much of 2013, declined by 1,000. According to Reuters, last month's decline in health care is only the second dip that sector has seen since 1990.

Though previous reports have made it appear as though the U.S. economy was picking up steam, USA Today noted that overall, job growth in 2013 was comparable to that of 2012. Last year, the economy added an average of 182,000 jobs a month, for a total of 2.18 million jobs. In 2012, a total of 2.19 millions jobs were added.

Despite the disappointing numbers in December, most economists believe that the decline was more of a hiccup than anything else.

"We do not think that the disappointing December payroll number marks the beginning of a renewed downward trend," said Harm Bandholz, chief U.S. economist at UniCredit Research in New York, to Reuters. "We continue to expect nonfarm payrolls will accelerate towards 200,000 to 225,000 in the course of this year."

Indeed, according to The Wall Street Journal, the survey of households, which plays a role in the data for the monthly jobs report, showed that 273,000 people did not report to work in December because of the colder-than-usual conditions.

According to USA Today, Allan Sinai, chief economist of Decision Economics, did, however, attribute part of the decline to a real problem: the mismatch between open positions in technology and other fast-growing industries and the skills of the unemployed and others looking for work.

"It's still a weak report," said Sinai in USA Today.

Reuters noted that some analysts speculated that the December jobs report could sway the Fed to hold steady on bond purchases, but most think the central bank will continue to scale back as planned. In December the Fed announced that it would lower its monthly bond purchases to $75 billion from $85 billion.

"I don't think the Fed is going to change its mind based on this," said Bill Cheney chief economist at John Hancock Financial Services in Boston, to Reuters. "The trend, in a broad sense, still looks quite favorable."