U.S. Only Developed Country Not to Mandate the Provision of Paid Time Off 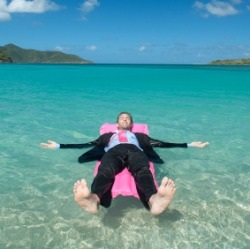 Memorial Day may mark the unofficial launch of the vacation season for some U.S. workers, but for others, summer means business as usual. The United States may be the only economically "advanced" nation not to mandate paid time off, and nearly one-quarter of its workers do not get any vacation time at all.

The new Center for Economic and Policy Research report suggests that the United States is the only advanced economy in the world that does not require employers to provide paid vacation. About 23 percent of workers do not have any paid time off, and those who have it as an employment perk get on average 13 days per year. European nations, in contrast, usually mandate between 20 and 30 days of paid time off, and Australia and New Zealand require at least 20 days.

USA Today notes that the CEPR first analyzed differences in paid vacation six years ago, and according to report co-author and the Center's senior economist John Schmitt, little has changed in that time.

"It is striking that six years after we first looked at this topic, absolutely nothing has changed," Schmitt told USA Today. "Relying on businesses to voluntarily provide paid leave just hasn't worked."

According to the CEPR report, American workers who do get paid time off as an employment perk are usually full-time employees of larger companies. They are also more likely to be higher wage earners: A full 90 percent of those in the top quarter of earners get paid vacation, compared to about half of those in the bottom quarter.

Of course, workers who do have paid vacation do not necessarily use it. Schmitt told Life Inc. that he believes many U.S. workers do not feel secure enough about their jobs to risk being out of the office for very long, even when they have vacation days available. He said he thinks people "get nervous about both asking for time off and taking time off."

Some experts warn that this all-work-and-no-play mentality could backfire down the line. San Francisco Bay Area psychologist Joshua Coleman told USA Today that work is inherently stressful, and that interacting with colleagues, making deadlines and meeting performance goals can be psychologically demanding. "We need breaks from that to recover, reboot," he explained.

That is precisely why U.S. Rep. Alan Grayson, D-Fla., introduced a bill this month that would amend the Fair Labor Standards Act to require employers to provide paid annual leave. He emphasized to USA Today that the requirement would be good for businesses, because "people who are forced to work every single day lose productivity."

Not all economists support the idea of mandated paid time off. Daniel Mitchell, senior fellow at the Washington-based think tank The Cato Institute, told USA Today that he believes the cost of mandated paid vacation would discourage growth.

"When you make it more expensive to hire workers, fewer workers get hired," said Mitchell.

"USA lags behind others in paid vacation, holidays," usatoday.com, May 23, 2013, Cathy Payne

Career and Education News
Home >
News>
U.S. Only Developed Country Not to Mandate the Provision of Paid Time Off