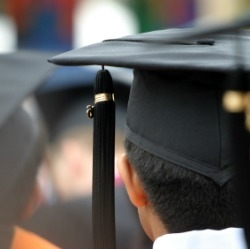 The University of California's Board of Regents confirmed last week that former U.S. Secretary of Homeland Security Janet Napolitano has been appointed to be the university's new president, making her the first female president in the system's 145-year history, the University of California reported. The decision was met with both optimism and some wariness by faculty members, administrators, students and higher-ed experts, as the institution is widely considered to be at a crucial juncture in its storied history, giving Napolitano's hiring perhaps even higher-than-usual levels of scrutiny.

Why the varied response? As The Chronicle of Higher Education pointed out, Napolitano, 55, who served as governor and attorney general of Arizona prior to becoming homeland security secretary, has never been a faculty member, nor has she held a university-leadership position, and her degree is in law -- not a Ph.D. Student regent Cinthia Flores, who cast the only vote against Napolitano's nomination, cited federal immigration policy as her reason for opposition. Several dozen protestors interrupted the regents' meeting with chants of "education, not deportation," contending that Napolitano's nomination should be blocked as a result of her agency's expanded deportations of illegal immigrants.

According to the Los Angeles Times, even UC officials admit that Napolitano is an unusual choice, as she will be the first nonacademic to run UC and only the second with no prior connection to the University of California system (she graduated from Santa Clara University in Northern California and attended the University of Virginia law school).

Robert Samuels, a full-time lecturer in the writing department at Santa Barbara and president of the UC system's union of lecturers and librarians, expressed his concern to The Chronicle of Higher Education over how the hiring of Napolitano could be viewed as a shifting culture at the university. "She's a symptom that universities have been taken over by an administrative class that sees education as essentially a business that needs to be run efficiently," he said. But, he added, he is reserving judgment until her views on higher education are made known. "The heart of the matter is that we just don't know what her take on a lot of these issues is."

Other faculty members have offered their strong support for Napolitano. Robert L. Powell, chairman of the university's system-wide Academic Senate and a faculty representative on the Board of Regents, told The Chronicle, "The UC presidency isn't about setting day-to-day academic policies and expectations. It's really about who Jerry Brown [the governor of California] picks up the phone and calls when he has a question, or who from the university flies to Washington to represent you. For that, she's perfect."

One potential controversy at least has been deflected. The Chronicle of Higher Education reports that Napolitano will earn an annual base salary of $570,000, which is slightly less than the $591,084 her predecessor, Mark G. Yudoff, received during the 2012 fiscal year. Regent Bonnie Reiss stated that she initially wanted Napolitano to be paid the same as Yudoff to ensure gender equality, but that Napolitano decided to take less, which could be seen as a strategic symbolic move at a time when the institution is struggling with painful budget cuts.

For her part, a "humbled" Napolitano said after the vote, as reported by the Los Angeles Times:"Perhaps the most important things I will bring with me to California are my ears. I have much to learn about the University of California and I plan to listen."

Napolitano will be succeeding Yudof, who served for over five years. Yudof, 68, will remain on the job until Napolitano begins her tenure in late September.

"U. of California Gets an Unexpected Leader in Janet Napolitano," chronicle.com, July 18, 2013, Seth Zweifler