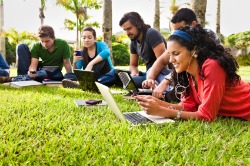 Students applying to the University of California surged to record numbers this year, as the public university system looks to accommodate more out-of-state and international applicants, a new report found.

Despite the recent spike in nonresident applicants, three-quarters of freshman and transfer applications next fall still come from California students, the San Francisco Chronicle reported. In light of Governor Jerry Brown's sweeping budget cuts slated to reduce funds to UC by $500 million this year, it has become critical for the university to step up recruitment of out-of-state freshmen. Students who reside outside of California pay nearly three times the tuition that residents pay: about $35,000 versus $12,000, which includes campus fees.

"That additional money is retained on the campus and enables us to offer more classes, bring in faculty and provide a broader array of choices--everyone benefits," said Susan Wilbur, director of undergraduate admissions.

Overall, the number of students seeking admission to the UC system next fall as freshmen or transfer students increased by 6.1 percent to a record 142,235 applications, up from 134,029. Of those applicants, more than 106,000 applied for a freshman spot, with 75 percent of them coming from California high schools.

The higher number of applications marks a significant accomplishment for university officials, who claim that increasing out-of-state student enrollment will help keep UC financially solvent. In December, a panel of professors, students and UC officials released a report outlining ideas addressing the statewide budget cuts that will dramatically affect the university's funding.

"It's gratifying for the university to see, particularly during these challenging times, the exceptional quality of our applicants," Wilbur told the Merced Sun-Star. "UC will be able to continue with the tradition of excellence in the state of California."

In an effort to accommodate more students, the university will likely relegate some candidates to a waiting list for the second year in a row, the Contra Costa Times noted. These students will have to wait longer to find out whether they have been admitted to the campus of their choice. According to Wilbur, the university expects to admit each qualified student to at least one of the nine undergraduate campuses this year, despite the budget cuts.

"Clearly we have demand, and clearly we would like to accommodate more students," Wilbur said.