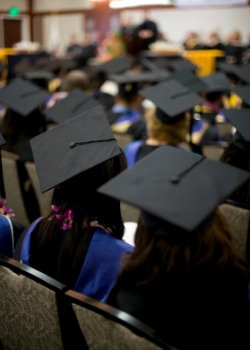 This time of the year is both exciting and emotional for many graduating college seniors. However, for one University of California Berkeley grad, walking across the stage was so much more than accepting a hard earned diploma.

Austin Whitney and a team of doctoral engineering students made the seemingly impossible possible during Saturday's commencement ceremony. After becoming paralyzed from the waist down in a 2007 drunk driving accident, Whitney stood up from his wheelchair and walked seven steps to accept his diploma and shake Chancellor Robert Birgeneau's hand, reported The Oakland Tribune.

Whitney was able to achieve his goal of not only finishing college but also walking across stage thanks to the latest version of an exoskeleton, which was developed by Homayoon Kazerooni, UC Berkeley mechanical engineering professor, and his team of Ph.D. students in the Robotics and Human Engineering Lab. According to UC Berkeley News Center, an exoskeleton is a device made up of mechanical braces that strap onto a user's legs and body that gives the user mobility. The braces have motorized joints, which are controlled by actuators, electronic sensors and a computer brain. The entire device relies on a portable power source.

Austin's exoskeleton is the latest in a series of exoskeletons that the team has developed. The project began in 2000 when Kazerooni received a grant from the Defense Advanced Research Projects Agency to create a device that would help people carry heavy loads for longer periods of time and distance. After unveiling the Berkeley Lower Extremity Exoskeleton (BLEEX) in 2004, Kazerooni realized the potential use of the exoskeleton, particularly for physical rehabilitation.

In addition to giving paralyzed individuals more mobility and independence, Minerva Pillai, one of the doctoral engineers on Kazerooni's team, explained that the exoskeleton has other benefits.

"People with permanent mobility disorders suffer from secondary injuries resulting from long-term wheelchair use. This technology offers an unprecedented degree of mobility and independence while decreasing the likelihood of secondary injuries," said Pillai.

For Whitney, however, the benefits were even greater.

"I can't tell you what it means to walk across that stage and look the chancellor in the eye or be able to hug my mom while standing up--that's priceless for me," he said to CNN.

While exoskeletons that are currently on the market cost more than $100,000, Kazerooni told the Oakland Tribune that he and his team hope to further develop Austin's exoskeleton into a more affordable device by late 2012 or early 2013. Kazerooni estimated that the cost would be less than $20,000, or about the same price as a motorized wheelchair.

"When I was getting out of the hospital four years ago, the last thing I was thinking about was graduating from college," said Whitney. "But I set that as my goal above everything else. And here I am, walking for my diploma. It makes me very hesitant to use the word 'impossible' ever again."

Whitney, who also gives motivational and anti-drunken-driving talks to students, plans to continue working with the engineering researchers and is also considering law school.