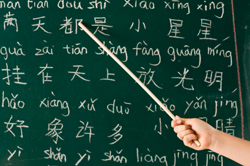 In an effort to meet the demands of foreign language classes, campus leaders at the University of California Berkeley announced that the institution would allocate more than $500,000 to add 30 more basic foreign language courses and accommodate some 500 more students, reported The Daily Californian.

According to International Business Times, enrollment trends, student demand and many other factors were taken into account when deciding which language programs would receive funding and how much each would get.

"We identified the most critical areas of the curriculum that served the broad student community, the 'common good,' where demand was simply not being met," said Catherine Koshland, co-chair of the task force that advised campus leaders and vice provost for teaching, learning, academic planning and facilities, to the UC Berkeley NewsCenter. "These courses are critical to our students' intellectual development and academic success, and also to their long-term success beyond Cal."

The increase in foreign language offerings is expected to benefit all students, regardless of their majors. While just five percent of undergraduate and graduate students declare majors in a foreign language, some majors require foreign language proficiency. Some students simply want a deeper understanding of their family and cultural backgrounds or want a competitive edge in today's increasingly global society, noted the UC Berkeley NewsCenter.

During 2010-11, the university added more than 1,000 seats for reading and composition courses. In Spring 2011, an additional 600 enrollment seats for math/science lower division classes in chemistry, math, physics and statistics were also added. George Breslauer, executive vice chancellor and provost said the increase in course offerings is part of a larger campus effort to "protect and enhance" the quality of instruction during difficult budgetary times.

According to The Daily Californian, in 2012-13, funding will go up to $600,000 per year to meet future demand. Furthermore, $25,000 will go towards the Berkeley Language Center and to the Center for African Studies in support of African languages.

Margaux Fitoussi, a senior history major, said she was thankful for the increase in basic foreign language courses. For two years, Fitoussi tried to enroll in a beginner Spanish class without any luck.

"Everyone I have spoken to is shocked that there is no elementary Spanish course and I do believe that increased funding to the language department would be incredibly beneficial for students," she said.