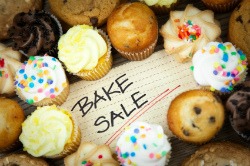 To spotlight a proposed affirmative action-like bill, University of California, Berkeley students sold baked goods on Tuesday and charged customers different rates depending on their ethnicity and gender.

"We agree that the event is inherently racist, but that is the point," said Shawn Lewis, president of the Berkeley College Republicans, in a written statement on the group's website. "It is no more racist than giving an individual an advantage in college admissions based solely on their race or gender."

The Berkeley College Republicans organized the "Increase Diversity Bake Sale" to draw attention to SB 185, legislation currently before Govenor Jerry Brown that would allow the UC and the California State University systems to consider factors such as race, gender, geographical origin and household income in student admissions. The bill must be signed or vetoed by October 9, The Daily Californian reported.

Students sold cupcakes to white men for $2, Asian men for $1.50, Latino men for $1, black men for 75 cents and Native American men for 25 cents. Meanwhile, the group gave women of those ethnicities a 25-cent discount on those prices, noted Insider Higher Ed.

"The purpose of the pricing structure ... is to cause people to disagree with this kind of preferential treatment," Lewis told CNN. "We want people to say no race is above another race, or no race is below another one."

The bake sale was to protest a phone bank the Associated Students of the University of California (ASUC) had organized to gain gubernatorial support of the bill, Insider Higher Ed reported. About 50 students took part in the phone bank while hundreds advocated for or against the bake sale on campus. About 300 students, clad in black, lay in the middle of Sproul Plaza, the location of the bake sale. A different cluster of students surrounded the sale and challenged Republicans to debate affirmative action's benefits. A third group handed out "conscious cupcakes" elsewhere on campus to protest how the College Republicans promoted their message.

Proponents of SB 185 argue that ignoring race and other social factors in the admissions process unfairly hurts underrepresented minorities, Inside Higher Ed noted.

"It is time California adopt the law of the land and eliminate policies that discourage college-eligible students from pursuing a higher education," said State Senator Ed Hernandez (D-West Covina), the bill's author.

Opponents, on the other hand, say the bill goes against Proposition 209. Voter-approved in 1996, Prop 209 ended affirmative action by prohibiting preferential treatment of students on the basis of race, gender, economic status or ethnicity. Former California Governor Arnold Schwarzenegger vetoed two similar bills during his term, arguing that they violated Proposition 209.

Though obviously provocative, CNN reported that the four-hour event was peaceful.

"Beside from selling cupcakes, there was a lot of conversations between people," Lewis said. "There were some aggressive people who came up with angry things to say, but there was no violence."