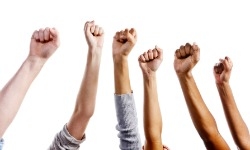 In a violent altercation, University of California, Berkeley police Wednesday arrested seven protesters who were establishing an Occupy Cal camp on college grounds despite previous warnings against doing so.

When individuals began pitching tents in UC Berkeley's Sproul Plaza in the afternoon, riot gear-clad campus police armed with bean bag guns announced that camping at the university was illegal and faced off with protesters holding hands and chanting, "Hold the line," according to The Huffington Post. Police pushed through the crowd, hitting with their batons those who resisted, the Contra Costa Times reported. Officers tore down the tents and arrested six UC Berkeley students and one associate professor for failing to disperse and resisting officers.

"Stop beating students," those in the crowd chanted, according to the The Huffington Post. "Put down the guns."

After the police left, students again set up their camp at the school. This resulted in a second showdown with the law.

Earlier in the week, Chancellor Robert Birgeneau told students in an e-mail that "any activities such as pulling fire alarms, occupying buildings, setting up encampments, graffiti or other destructive actions" wouldn't be tolerated.

"In these challenging times, we simply cannot afford to spend our precious resources and, in particular, student tuition on costly and avoidable expenses associated with violence or vandalism, Birgeneau wrote, as quoted by the Contra Costa Times.

The conflict between police and protesters topped off an otherwise calm Occupy Cal day of action on and off campus designed to show support for affordable higher education and the Occupy movement, reported The Daily Californian. Protests began at 8:30 a.m. with primarily graduate student instructors participating in teach-out lectures in various spots on campus.

Following that, protesters marched down Telegraph Avenue to Bank of America and chanted, "Banks got bailed out, we got sold out."

"If people understand the issues, they can better understand what to do about them," he was reported as saying in the Contra Costa Times. "I don't think they're very knowledgeable about it."