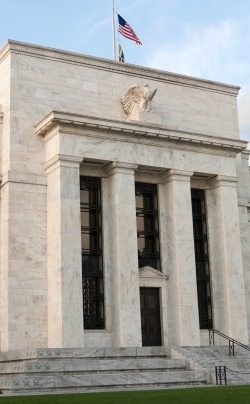 Yellen will follow several other UC Berkeley faculty members in serving the U.S. government. According to Berkeley-Haas, Haas Professors James Wilcox and Carl Shapiro have served on the President's Council of Economic Advisers -- Wilcox for the first President Bush and Shapiro for President Obama. Laura Tyson, another Haas professor, served as both a member of President Obama's Economic Recovery Advisory Board and chair of President Clinton's Council of Economic Advisers.

While at Berkeley, Yellen became the second woman to earn tenure at the Haas School of Business and to become a full professor. Her achievements for women did not stop there.

In addition to becoming the 15th Fed chair, Yellen will also become the first woman to hold the position. Several notable figures commented on the significance of Yellen's confirmation. Richard Trumka, president of AFL-CIO, told Reuters that "[h]er well-deserved ascension to the chair knocks a notable hole in the glass that has for too long kept women from the most powerful jobs in the country." Terry O'Neill, president of the National Organization for Women, mentioned that she hopes Yellen would help the path for other women to earn top positions in finance. She continued, "The financial industry is a place where women have been aggressively excluded from the top, top management. Janet Yellen can make a difference." Senator Lisa Murkowski, who contributed one of the 11 Republican votes for Yellen's confirmation, echoed O'Neill's thoughts, stating that "...perhaps with [Yellen's] leadership that will act as a motivator to young women to get into the field."

Politico noted that as the economy improves, Yellen's primary role as Fed chair will be to pull away from current Chairman Ben Bernanke's quantitative easing strategy, under which the Fed bought numerous Treasury and mortgage bonds to keep long-term interest rates low. However, she will likely face several challenges in the process.

The Federal Reserve has been undergoing much scrutiny from Congress, especially Congressional Republicans. Congress has called for more transparency in the Fed's actions and has been skeptical of the effectiveness of quantitative easing.

Bernanke recently spoke of Congress's working relationship with the Fed chair. When asked which advice he'd give Yellen on working with legislators, he said, "Congress is our boss…They represent the public, and they certainly have every right to set the terms on which the Federal Reserve operates and so on."

Effective communication will be another key challenge for Yellen. As Jeff Kleintop, chief market strategist at LPL Financial, commented, "The market and the Fed do not have a relationship built on effective communication and that must improve in 2014 for Janet Yellen to be successful as she steers the Fed into taking a less direct role in influencing the market."

Despite these and other challenges, President Obama expressed confidence in his nominee after the Senate confirmation: "The American people will have a fierce champion who understands that the ultimate goal of economic and financial policymaking is to improve the lives, jobs and standard of living of American workers and their families."