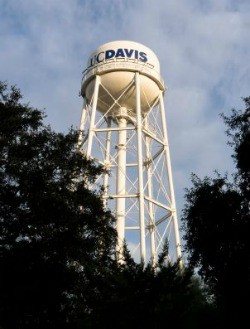 After national outrage over police use of pepper spray on nonviolent student protests at the University of California Davis campus, UC Davis Chancellor Linda P.B. Katehi apologized before thousands of students and faculty members.

According to the Los Angeles Times, outrage continues to build over police officers' use of pepper spray against peaceful student protesters at UC Davis last Friday where the roughly 20 students demonstrating against California's continued education budget cuts had erected tents on campus. Chancellor Katehi ordered armed police officers to remove the students, citing health and safety concerns. The officers administered pepper spray before walking the handcuffed students off the site.

A number of witness-captured video clips of the incident have gone viral online. Since the incident, Katehi has ordered the campus police chief and two involved officers on administrative leave. She delivered what the Los Angeles Times called a "tense" apology before thousands of students and faculty on Monday in an effort to diffuse the situation.

"I am here to apologize. I feel horrible for what happened," said Katehi as quoted by Inside Higher Ed. "...Our university has to be better than it is, and it needs all of the community to come together to do that. We need to work together... It is my responsibility to earn your trust."

According to Inside Higher Ed, the apology has done little to quell frustrations. Even a few UC Davis faculty members have publicly criticized Katehi's decision to order armed police officers to the scene in the first place. The school's English department has called for both Katehi's resignation and the abolition of the university's police department, for instance, and other faculty members have voiced their concerns elsewhere, arguing that the encampment was no threat to campus safety.

"Really? Twenty tents on the quad 'raised serious health and safety concerns?'" faculty member Bob Ostertag wrote in a column in the Huffington Post, which The Chronicle of Higher Education quoted.

"The students are just extraordinary," he said. "The administration is certainly not providing any leadership."

Faculty members from other universities have also commented on the ordeal. Yale University philosopher Matthew Smith is collecting signatures from professors nationwide in an open letter condemning Katehi and the officers, according to Inside Higher Ed.

State Sen. Leland Yee also criticized the Katehi-appointed panel that is to investigate the ordeal.

"Only a truly independent investigation--absent the influence of her office or the police department--is in order," said Yee as quoted by Inside Higher Ed.

Still, some public figures have come out in support for Katehi. For instance, Fox News commentators Bill O'Reilly and Megyn Kelly stressed the legality of pepper spray, noting that its use made it easier for police officers to remove the protesters.

Despite Katehi's apology, The Chronicle of Higher Education reported that several dozen students set up new tents as Monday's rally winded down.