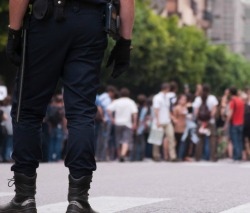 It's been almost a year since the infamous pepper spray incident during an Occupy protest at the University of California, Davis. Students gathered to protest tuition hikes but were met with police pepper spraying and arresting them. After months of outrage and conflict with the university, the vicitims of the incident are receiving a settlement.

According to SF Gate, 21 UC Davis students who were pepper sprayed in November will receive $30,000 in compensation -- a total of $630,000 for all victims -- and a written apology from UC Davis's chancellor, Linda Katehi. Additionally, the American Civil Liberties Union (ACLU) will receive $250,000 for representing the students. For students who were not represented in the settlement but can prove that they were pepper sprayed, the university will set aside $100,000 for compensation. Even students whose academic performance was disrupted by the incident will receive something: in such cases, the university will provide assistance such as letting students retake courses for free. Finally, The Wall Street Journal adds, $20,000 will be allocated for the university and the ACLU to create new policies on student demonstrations, crowd management, and the use of force. $20,000 in funds will be allocated to this measure. Overall, the university will be paying $1 million in settlements.

Although the students are happy with the settlement, it still does not remove all bitterness between students, the university, and police. The university did not admit to any misconduct, and John Pike, the former lieutenant officer who sprayed most of the students, was cleared of charges of illegal use of force during the protest. Fatima Sbeih, a recent UC Davis grad who was sprayed during the protest, mentions in the Los Angeles Times that the incident induced a rift between students and campus police, as students who gathered to peacefully rally against tuition hikes had to endure police violence. Ian Lee, another protester, said that he "felt like the university silenced me."

Many others empathize with Lee's feeling of being silenced. Michael Rishner, ACLU Northern California's staff attorney, asserts in SF Gate that the way the police reacted to the protest was a violation of the first amendment: "If the First Amendment means anything, it's that students should be able to exercise their free-speech rights on their college campus without being afraid of police violence."

Although this rift has yet to be resolved, the settlement did help somewhat. As Sbeih mentions in the Los Angeles Times, "It's a lesson for other UCs and universities across the nation to really think critically and not make rash decisions when dealing with protesters because they will be held accountable for it."

The incident itself and the fallout from it at the very least signaled an important message to students, the university, and other universities. As UC Davis spokesman Barry Shiller said in a statement, as quoted by SF Gate: "When one looks back at the totality of this, what it led to was a difficult lesson that the campus took to heart, that the university took to heart and (one that) allows the campus to refocus on the things that make it great."