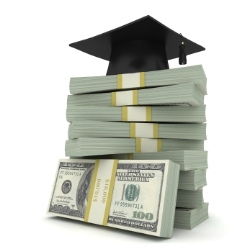 Faced with a higher than anticipated $650 million cut in state funding, the State Board of Regents voted 14 to 4 to increase UC tuition by 9.6 percent for the fall, an increase that is on top of a previously approved eight percent hike scheduled to take effect the same semester, reported the Los Angeles Times. The combination of tuition hikes means that UC students will have to pony up $1,818 more in tuition than they did last year. As SF Gate pointed out, one year at UC for California residents will cost $13,218 before room and board, which is more than twice what it cost in 2005. According to the Los Angeles Times, when all expenses are factored in--room, board, books and campus fees--undergraduate students will have to pay more than $31,000 for the coming academic year.

Regents and students alike expressed outrage and concern over the increase. The Daily Californian reported that before the meeting, student leaders gathered to convince the board to reject the additional fees.

"I definitely understand the difficult challenge (the board members) face and the financial seriousness of this financial crisis, but the solution can't be to hoist the cost on the back of our students," argued Bahar Navab, president of UC Berkeley's Graduate Assembly. "It's just not a sustainable model."

Regent Bonnie Reiss shared similar concerns, but admitted that the regents had been backed into a corner.

"Faced with enormous financial cuts forced on us by political leaders, we only have a handful of options to us, and all are horrible options," said Reiss as quoted by CNN. "As much as I hate voting for the increase, I hate even more letting this institution slide into mediocrity."

Not all students will be affected by the increase, however. According to UC Newsroom, one-third of the tuition increase will go towards financial aid. Students whose families have an annual income of $80,000 or less pay no tuition. For students from families with annual incomes up to $120,000, the tuition increase for the first year will be waived.

Though steep, SF Gate noted that the tuition increases will only cover a quarter of UC's $1 billion shortfall. In order to cope, UC has cut costs across all campuses and recruited more out-of-state students. Non-California students pay nearly three times the tuition of in-state students.

Still, many students felt the regents are out of touch.

"I don't feel the regents are showing solidarity with the students," said Alex Jreisat, student at UC Santa Barbara.

The Los Angeles Times reported that if state revenues do not pick up, UC may face a third tuition increase later in the year.