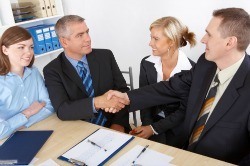 A major University of California employee strike has been averted. Union leaders announced they reached a tentative contract with university officials, reported the Los Angeles Times. The agreement not only staved off the third union strike since May but also continues new UC President Janet Napolitano's streak of settling long-simmering labor disputes.

The AFSCME 3299 union announced Thursday that it has reached a tentative contract with UC officials for 8,300 service workers, pulling the plug on a five-day, 20,000 worker strike at university campuses and medical centers. University spokesperson Dianne Klein told The Daily Californian that the four-year contract would offer affected workers -- primarily custodians and food-service staff -- a 13.5 percent across-the-board wage increase, plus additional 2 percent step increases each year for the next three years, depending on workers' experience, seniority and skills. The contract would also limit the number of outside contractors the university could hire, though Klein said the system was already prohibited from hiring outside contractors in cases where the university would have to lay off AFSCME workers.

Another highlight of the proposed contract is the freezing health benefit costs for lower-salaried workers -- a deal no other union to date has struck. Union spokesperson Todd Stenhouse called this particular concession "historic," since it would help workers who had been "forced to choose" between paying their rent or covering for medical costs.

"After more than a year of good faith bargaining, we have finally reached a historic agreement with UC that will pull thousands of its full-time employees out of poverty and begin to rectify staffing practices that needlessly put our members and the people they serve at risk," AFSCME 3299 President Kathryn Lybarger told The San Jose Mercury News.

"It is good to have this bargaining wrapped up with a deal on its way to our valued service employees," Dwaine B. Duckett, the vice president of human resources, told The Mercury News.

According to the Los Angeles Times, the new agreement marks a major win for UC President Napolitano. The publication called the ASFCME one of the most publicly vocal unions, known for "noisy" demonstrations at UC regents meetings and for demanding strikes. The union has struck twice since May, costing the university millions of dollars.

Another AFSCME 3299 group, which includes 13,000 UC patient care technical workers, had scheduled a sympathy strike for next week, reports The Mercury News. They are still at the bargaining table, with talks expected to continue into the week.