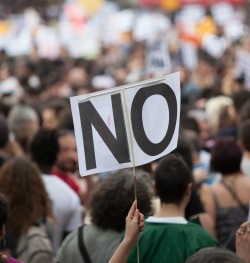 California's Proposition 30, which aimed to stop tuition increases for the state's public universities and raise funds for K-12 schools, passed last week. However, despite the proposition's success, UC Regents are still discussing the possibility of fee hikes, leaving students outraged. As a result, many University of California students are holding protests to express their disapproval.

The California Aggie reported that UC students and staff held a sleep-in demonstration Wednesday night at the UCSF Mission Bay campus, where the Board of Regents met today, and planned to picket during the meeting. Protestors wanted to "shut down the Regents' vote" on a measure called Professional Degree Supplemental Tuition (PDST), which would implement a fee increase for 61 UC graduate and professional programs. According to The Daily Californian, students held a corresponding demonstration on the UC Berkeley campus yesterday. Demonstration activities included a general assembly and open university teach-out. The protests corresponded not only with the third day of the Regents meetings but also with Professor Robert Reich's speech during the Occupy Cal movement on November 15 of last year.

Some of the protestors' other demands included prohibiting privatization in the UC system, democratizing the UC Regents by holding elections rather than appointing individuals to the board, and increasing minority enrollment in UC schools via affirmative action. Benjamin Lynch, a member of Berkeley's student group BAMN, added that the group is also calling for no additional tuition and fee hikes for professional programs. He expressed his distress with the aftermath of Proposition 30: "The passage of Prop. 30 was a huge success, but it is absolutely scandalous that just a week later the UC Regents are discussing fee hikes."

NBC Bay Area reported that during yesterday's regents meeting, Governor Jerry Brown tried to convince the board to not raise tuition this year, stating that the extra funds that Proposition 30 measures would raise would give California financial "breathing room." However, regents claimed that due to spending cuts, $276 million in state funds is needed in order to prevent tuition hikes. Although regents are reluctant to stop tuition increases, Brown did convince them to postpone discussion of PDST. He also convinced the California State University Board of Trustees to postpone a vote on three new fees.