UC System Bans Smoking and Tobacco Use on Campuses 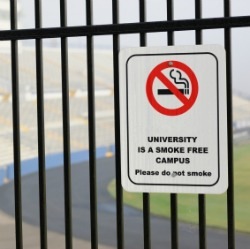 In an effort to promote health care and environmental practices, the University of California system has implemented a smoke and tobacco free policy, which went into effect January 1.

According to UC's Office of the President website, the new policy prohibits all students, faculty, patients and visitors from smoking and using nicotine products at all UC campuses, centers and labs as well as outdoor areas, including parking lots and private residential space. Additionally, the sale and advertising of tobacco products is also prohibited in all UC facilities. UC will not have officials monitoring the grounds for enforcement. Instead, the system is relying on voluntary and social enforcement and has compiled a list of educational and cessation resources for smokers on its website. According to the Orange County Register, the University of California Irvine may implement punitive measures, such as fines, after two years.

KCRA News reported that former UC President Mark Yudof first announced the smoke and tobacco ban in 2012, but gave each campus autonomy to roll it out. Though the policy became the official standard at the start of the new year, U-T San Diego pointed out that some campuses began enforcing the policy earlier. The University of California San Diego, for example, implemented its policy in September, while UCLA started its smoking ban last April. Smoking had already been banned at all UC medical centers since 2011. The UC system joins more than 1,180 colleges across the nation that have adopted smoke-free policies.

Some California State University campuses are also banning smoking and tobacco use. According to the Orange County Register, in August, Cal State Fullerton was the first CSU campus to prohibit smoking. U-T San Diego reported that San Diego State University recently announced it would follow suit. SDSU had already been largely tobacco-free, permitting smoking in only its 12 designated areas, but when students return for the spring semester on January 22, the campus will be entirely smoke and tobacco free. Boards announcing the new policy will replace ashtrays in the former smoking areas.

While nine UC campuses have banned smoking as well as the use of regulated and unregulated nicotine products, the University of California Irvine will allow the use of electronic cigarettes and chewing tobacco, reported the Orange County Register. When asked why it would permit e-cigarettes, a UCI spokesperson said it is because the health effects are still unknown.

"It's our understanding that each campus was given the autonomy to come up with its own policies, and our policy does have a provision that can prohibit e-cigarette use," explained UCI spokesperson Tom Vasich, in an email to the Orange County Register.

Vasich noted that individual areas on campus, such as classrooms or offices, have the authority to prohibit e-cigarettes, and that the university would further address the issue when more scientific evidence becomes available.

U-T San Diego reported that student reactions towards the new policy have been mixed on the UCSD campus. While some said they were happy the tougher ban was implemented, others questioned if it would really make a difference in people's smoking habits.

"I don't see people quitting because of this," said Pradeep Reddy, an international graduate student at UCSD, to U-T San Diego.