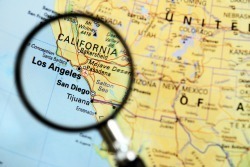 A UCLA Anderson forecast released Thursday projects an economic rebound for the state of California in the coming years. The forecast, which was prepared by economists at UCLA's Anderson School of Management, also found that employment numbers in some of California's largest cities outperformed the rest of the country in 2013. According to the Los Angeles Times, certain regions fared better than others, including Silicon Valley, Los Angeles, the Inland Empire, and Orange County, while the East Bay area, San Joaquin Valley, and counties near Oregon performed slightly worse than the national average.

Additionally, UCLA economists predicted a further decline in California's unemployment rate due to expected improvements in the state's job market. However, an increase in the state's labor force could skew the numbers, according to economists who worked on the report, as could the number of workers who give up on looking for work altogether. As always, those variables are hard to predict and even harder to measure.

"The whole reason you talk about discouraged workers is that people drop out of the labor force to do something else, because the markets aren't providing them with good enough options," Jerry Nickelsburg, a senior economist with the UCLA Anderson Forecast, told the Los Angeles Times. "We have just the opposite. We have people coming into the labor force -- hundreds of thousands of them since the recession."

A Beacon Economics report points to potential expansions in manufacturing and exports as additional factors that could add to California's economic recovery, noted the Los Angeles Times. The report, which was conducted for City National Bank, includes promising details for workers in the state, including the fact that 56 percent of jobs created in California within the past year are in industries that paid over $50,000 in annual wages. However, the same report adds that more low-wage jobs will be added in the years leading up to 2020, which is leading many economists to believe that wages won't necessarily keep up with the economic recovery in the state.

In his semi-annual California Regional Economic Outlook report, Bank of the West Chief Economist Scott Anderson, Ph.D. agreed with the sentiment that California's job market and economy will continue to improve. However, according to a press release, several factors continue to stand in the way of many Californians' ability to recover fully from the last recession. Examples include a higher-than-average unemployment rate, high housing prices, the end of extended federal unemployment benefits, and agricultural decline due to drought. However, according to Anderson, some sectors of the economy could provide economic relief and job opportunities for California residents.

"Despite these potential headwinds, California's population is expected to increase steadily into the future, as the economy, labor force, and personal income levels in the state continue to rise," Anderson said. "As job growth accelerates, we can anticipate a boost in private sector industries, creating new business opportunities in traditional and emerging sectors. Similarly, we can expect job creation in some of the most dynamic sectors in the state, including professional and business services, leisure and hospitality, trade, education and healthcare.