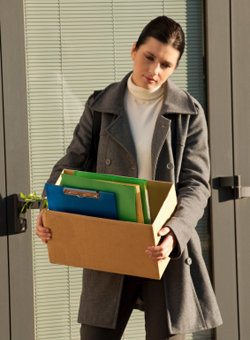 Whether you're reading about it in the news or are a victim of it yourself, we're all familiar with employment discrimination towards the jobless. However, a recent study by researchers from the University of California Los Angeles and the State University of New York-Stony Brook uncovered some surprising results.

As ABC News pointed out, the fact that employers tend to shy away from interviewing, yet alone hiring, someone who has been unemployed for many weeks or even years, is nothing new. The longer a person is out of work, the more recruiters and hiring managers question his or her competence, abilities and skills--a phenomenon often referred to as "skill decay".

What a group of UCLA-Stony Brook researchers found out, however, is that the stigma of being unemployed doesn't affect just the long-term jobless--it starts the minute the person leaves his or her job.

According the UC Newsroom, lead researcher Geoffrey Ho, a doctoral student in human resources and organizational behavior at the UCLA Anderson School of Management, and co-author Margaret Shih presented study participants with fictitious resumes. Half of the group was told the resume they were reviewing was from an employed person, while the other half were told the person was unemployed. Participants were then asked to rank the applicant's competency and whether the person made a good impression (for instance, did he or she seem friendly, good natured, sincere and well intentioned), reported ABC News.

Despite the fact that they evaluated applicants with the exact same background, participants said they were less willing to interview or hire the person who was unemployed than the one who currently had a job.

"Economists have tended to chalk up long-term unemployment to the probability of skill decay or discouragement, or employers' perceptions of skill decay," said Shih. "But we're finding that when there's no evidence that skills have deteriorated, out-of-work job applicants are still at a disadvantage."

"We were surprised to find that, all things being equal, unemployed applicants were viewed as less competent, warm and hirable than employed individuals," said Ho.

Interestingly, noted ABC News, the applicant's reason for departure had no effect on participants' judgments. For example, applicants who voluntarily left their jobs faced the same stigma as those who were laid off or terminated. The only time departure didn't matter was when it was in no way attributable to the individual, for instance, if the employer went bankrupt.

The Daily Bruin reported that government hearings had recently been held to possibly amend Title IV of the Civil Rights Act to make it illegal for employers to refuse employment or lower compensation based on employment status. However, even if the legislation were approved, detecting the practice is not always easy.

UC Newsroom reported that moving forward, the UCLA-Stony Brook team will look at whether the state of the economy played a factor in the psychological stigma of unemployment. The team will also survey human relations professionals to see whether they share the same prejudices as the general public.

"Out of work? Your resume is no good here," universityofcalifornia.edu, March 31, 2011