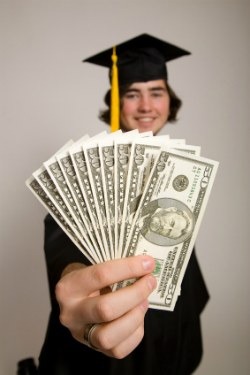 Students at the University of California at Riverside have proposed a new payment plan that will allow students to pay 5 percent of their salaries back to the UC system for 20 years after graduating. The plan would effectively eliminate tuition and student loans.

"Charging students when they're making money just makes sense," noted Chris LoCascio, president of Fix UC, the group proposing the plan, who was interviewed by KABC-TV in Los Angeles. "It's really surprising to me that this hasn't been pursued, at least here in the United States."

LoCascio said that the "UC Student Investment Proposal," as it is called, would help students financially and would ultimately generate more income for UC than the current tuition does. "Under this plan," he said in a presentation to the regents, "no undergraduate student would have to worry about paying for their UC education while they are in school."

According to the Los Angeles Times, the plan would offer discounts for transfer students, graduates with careers in public service, and those who remain and work within the state. International and out-of-state students would pay 6 percent per year.

The proposal comes as UC is grappling with a financial crisis. As reported by SF Gate, UC currently receives just over $2 billion from the state's General fund. That's about $1 billion less than in recent years, and UC has cut staff, courses and maintenance as a result. Current tuition for California undergraduate students is $12,192, not including room, board and fees.

Students estimate that the proposed plan would at least triple UC's revenue over the next two decades to $4.6 billion. The plan would be phased in over several years, and students predict that by the seventh year, UC would be receiving more income from graduates than it typically would from tuition.

Mark G. Yudof, president of UC, noted that he was "very impressed" with the proposal. "We think the ideas are constructive," he was reported as saying by the Los Angeles Times.

Many students were excited with the plan. "I think that is a great idea," said Justin Bui, a student who was interviewed by KABC-TV. "I think it would be good because that way you don't have to worry about it. You can get your education done, get into the work force."

Nevertheless, UC officials said that the plan's vague ideas about enforcing payments were problematic. Similarly, Republican State Assemblyman Don Wagner, who was interviewed by NBCLA was skeptical about the plan.

"Reluctantly and regrettably," he told NBCLA, "I think this is probably something that doesn't fly."