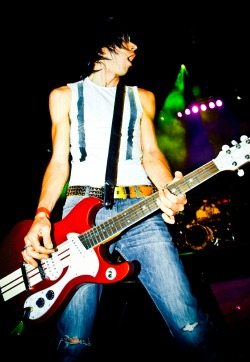 New College Nottingham (NCN) is taking music education to a new level. According to BBC News, starting September 2013, the college plans to offer a foundation degree in heavy metal music.

Liam Maloy, music performance lecturer at NCN, invested seven months in crafting the two-year course, which he describes as "academically rigorous." The course allows students to gain experience composing and performing heavy metal music. Students can also examine the music industry, the role of heavy metal in video games and film, and the history of heavy metal. During the second year of the course, students can go on tour around England. The Telegraph noted that students can explore how prominent heavy metal bands originated as well as heavy metal's ties to philosophy and religion. After the two-year period is over, students have an opportunity to seek a BA degree from Nottingham Trent University with an additional year of study.

"You can study music at Oxford, Cambridge and in cities all over the UK, but here in Nottingham we wanted to offer something special that reflects our city's culture and employment opportunities," Maloy commented.

Some are skeptical regarding the value of NCN's new degree. As stated in The Telegraph, education campaigners have asserted that the degree would not appeal to employers and may, in fact, even put students at a disadvantage. Chairman of the Campaign for Real Education Chris McGovern does not believe that the degree would have marketplace credibility. "I just don't think it will impress an employer to find a youngster has a degree in heavy metal. It could become a 'disqualification.'" McGovern went on to say that the degree option would mislead people into believing that earning the degree would equal a path to playing in a heavy metal band, when in reality, "[t]he rock musicians who have been successful didn't need a degree to get there."

Maloy and other proponents of the degree program, however, defended the credibility of the degree. The purpose of the program, tutors pointed out, was not about "creating the next rock star" but about both tapping into the city's booming music industry and helping students who want a career in the industry, whether that career be in teaching, performing, recording or publishing.

According to This Is Nottingham, over 20 students have signed up for the course, which is slated to cost £5,750 per year. Nottingham has a huge heavy metal following. Not only was Earache Records, a heavy metal-focused record label, founded in the city, but additionally, the region's Download Festival appeals to over 75,000 rock and metal fans on an annual basis. As Maloy stated, "Nottingham's music industry is becoming stronger each year. Our students aspire to work in metal music marketing, at festivals and as promoters - this course will make that happen for them." He went on to say that the degree was launched due to student demand and that the course creators "have aligned the curriculum to jobs in Nottingham's growing industry."

Despite criticism from skeptics, The Telegraph revealed that Maloy is enthusiastic about NCN's new degree program: "Heavy metal is an extremely technical genre of music and the study of its culture and context is a rising academic theme, so we're very excited to be at the forefront of its integration with education."