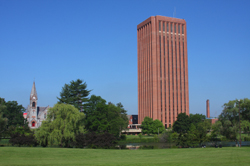 According to MassLive.com, the program is called the Community College Connection. The Boston Globe reported that under the program, community college grads who earned a 2.5 grade point average will be guaranteed admission as well as granted priority registration and housing, scholarships for student fees and special advising services at the University of Massachusetts Amherst.

Not only is it an effort to diversify the student body by attracting immigrants, low-incomes families and first-generation college students to UMass Amherst, it is also an effort to publicize a state policy that guarantees admission to state community college graduates with exceptional grades--those who earned a 2.5 GPA are guaranteed admission, while students with a 3.0 GPA get the $1,700 a year tuition waived. Under the program, graduates with a 3.7 GPA or higher will also get a $500 book scholarship.

Furthermore, these students will also receive more services on campus, including priority registration, having their financial aid packages calculated before other transfers and a chance at one of the 50 reserved housing slots specifically for community college transfers.

"We take seriously our historic mission of access as the Commonwealth's land-grant university," said UMass Amherst Chancellor Robert C. Holub in a press release. "Facilitating the enrollment of community college graduates in today's world is one way to guarantee that access. We want students here at Roxbury and community colleges across Massachusetts to envision a future at UMass Amherst..."

According to the press release, the Community College Connection program is slated to start fall 2011. Chancellor Holub hopes the program will strengthen the ties UMass Amherst already has with state community colleges. Each fall, more than 500 community college grads transfer to the university. The Boston Globe noted that the institution hopes to increase that enrollment by 20 percent over the next five years.