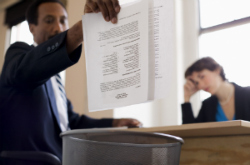 Finding a job in today's economy is already a difficult task. The last thing anyone who is unemployed needs to hear is that they should not even apply in the first place, but that is exactly what some applicants are discovering.

Most of these restrictions disappear, however, when an employer or recruiter is questioned by the media. Still, even if companies do not explicitly say it, experts believe that unemployed applicants are automatically ruled out. "Most executive recruiters won't look at a candidate unless they have a job, even if they don't like to admit it," said Lisa Chenofsky Singer, a human resources consultant from Millburn, NJ.

Being labeled unemployed seems to create a stigma for many applicants. CNN discovered that some recruiters perceive the unemployed as weak performers and that those who are still employed are the very best because they survived the recession. Some worry that a person who has been out of work for more than six months will be "rusty" or that an unemployed candidate will accept any offer, only to jump ship once a better opportunity comes up. Erinn Height, whose position as a senior manager in human resources for Avis was cut about two years ago, adds, "Other comments are related to challenging the boss' authority if I have more experience in that area."

Unfortunately, labor attorneys say that the practice is not against the law. Judy Conti, a lobbyist for the National Employment Law Project, told CNN Money that this is a bad practice, especially since firms could benefit from the recently passed Hiring Incentives to Restore Employment Act , which essentially exempts employers from paying the 6.2 percent of a new hire's wages in Social Security taxes for the rest of this year.

Rich Thompson, VP of learning and performance for Adecco Group North American, the world's largest staffing firm, believes that part of the problem is that recruiters and human resource departments are overwhelmed by applicants and are looking for a quick way to get through the vast number of applications.

While this may be common among some companies, there are others that are more understanding. However, applicants should still work on filling the gaps in their resumes. Michael Mazzeo, professor of management and strategy at Northwestern University says applicants "need to spend a lot of time building up their human capital." He recommends finding a temporary job, seeking additional job training or certification or volunteering to keep a competitive edge.