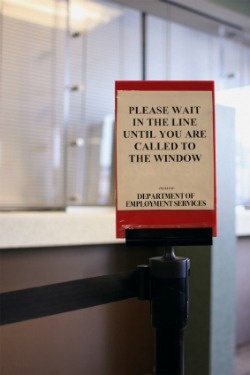 After a volatile week for U.S. stock markets, the Labor Department's report on unemployment benefits claims offered a bit of relief.

The number of first-time unemployment claims fell 7,000 to 395,000 in the week ended August 6, causing stock markets to rise early Thursday. The figure is a decrease from the upwardly revised 402,000 initial claims the prior week and is the lowest figure since early April, reported MarketWatch. The average of initial claims over the last four weeks, a more accurate gauge of employment trends, decreased by 3,250 to 405,000, the lowest count since mid-April. First-time claims had shown improvement this year before hitting a peak of 478,000 at the end of April. The fact that claims have decreased since then is encouraging news, but economists still highlight that claims are well below 400,000 during good economic times.

With concerns that the economy will slide back into a recession, economists have kept a close eye on the number of unemployment benefits claims.

"The trend in claims is going to be one of the most important things we watch over the next few weeks or so, to gauge whether we're entering another recession," said Brett Ryan, U.S. economist with Deutsche Bank, to CNN Money.

The downward trend in the four-week moving average has alleviated some fears of a double-dip recession. Furthermore, Bloomberg reported that claims filed for the second week or more of benefits decreased by 60,000 to 3.69 million in the week ended July 30. That is the biggest drop since February.

Though encouraging, the numbers are not strong enough to kick the job market in motion and a number of other factors suggest that the improvement is temporary, reported The Wall Street Journal. In comparison, two years into the last economic recovery, unemployment claims fell to about 360,000. Furthermore, layoffs are still a concern, a sharp selloff in stocks has undermined confidence and the U.S. is still feeling Japan-related repercussions in the auto industry.

Bloomberg also reported that the recent plunge in stocks followed by the U.S.' loss of its AAA credit rating has put even the employed and wealthy on edge, which may further lower consumer spending.

"It's still an open question as to whether the decline in confidence of late will lead to a slowdown in hiring," said Julia Coronado, chief economist for North America at BNP Paribas in New York. "But there will be some knock-on effects from the volatility and worries."