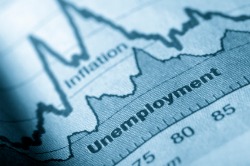 The number of Americans filing for unemployment claims declined last week, showing a slight sign of improvement as the labor market recovers.

First-week applications for unemployment fell to 421,000 last week, down 17,000 from the previous week, the Labor Department said Thursday. According to CNN Money, the figure was lower than analyst predictions of 429,000 for the week.

The four-week moving average, a less-volatile measure, dipped to the lowest level in more than two years, Bloomberg reported. Economists emphasize the usefulness of this barometer because it balances out fluctuations due to holidays, strikes, weather-related layoffs and other one-time events. With positive expectations for growth on the rise, economists say employers are beginning to hold on to more workers.

"The labor market is moving in the right direction, slowly but surely," said Ryan Sweet, senior economist at Moody's Analytics Inc. in West Chester, Pennsylvania. "Things look a little better than they first appeared, but we're still not creating enough jobs to lower the unemployment rate."

Economists say the nation's 9.8 percent unemployment rate, the highest it has been since April, will not budge unless the labor market expands at a quicker pace. During an interview broadcast on December 5 by CBS Corporation's "60 Minutes" program, Federal Reserve Chairman Ben S. Bernanke said that "it could be four, five years before we are back to a normal unemployment rate."

According to The Daily Finance, unemployment applications need to fall below 400,000 during the next two quarters in order to give analysts and investors confidence that economic activity is picking up at a pace that will result in less layoffs and more hiring. Each 10,000 decrease in first-week unemployment claims translates to about 25,000 new jobs created per month.

Meanwhile, the number of people continuing to apply for jobless benefits dropped by 191,000 to 4.09 million, Bloomberg noted. The figure, which reflects Americans whose benefits have been exhausted as well as those who have found work, beat analyst forecasts of 4.24 million. This number, however, does not include workers who have received extended benefits under federal programs.

On December 6, President Barack Obama announced an agreement with congressional Republicans to extend Bush-era tax cuts and finance unemployment insurance for long-term jobless Americans for 13 months. As of now, emergency benefits for the unemployed expired on November 30, which the Labor Department has estimated would disrupt aid to 1.36 million before 2011.