Unemployment Rate Dropped In Most States But Economic Recovery Is Uneven 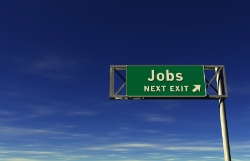 According to the Labor Department, employment conditions in many states are continuing to improve, but most states still face high unemployment rates.

Three states have consistently had the lowest unemployment rates throughout the recession--North Dakota (3.3 percent), Nebraska (4.2 percent) and South Dakota (4.9 percent). New Hampshire joined the group in April, with a jobless rate of 4.9 percent. The states with the highest unemployment rates include Nevada, at 12.5 percent, and California, at 11.9 percent. Though still high, last month's 12.5 percent unemployment rate in Nevada is an improvement over the state's record 14.5 percent in December. Moreover, the state's 0.7 percentage point decline from March is the largest one month decline among all of the states, noted The Wall Street Journal. The Los Angeles Times reported that the decline in California's jobless rate is also significant as it is the first time since August 2009 that the state's rate has been below 12 percent.

According to Reuters, during the month of April, payrolls grew in 42 states and the District of Columbia. While the nation added 244,000 jobs in April, most of the growth was powered by New York, which added 45,700 jobs, Texas, 32,900, and Pennsylvania, 23,700. The Los Angeles Times reported that California added 8,900 jobs last month, 700 of which were added in the San Francisco metropolitan area and 2,900 in Silicon Valley.

The Atlantic speculated that recovery should continue as is--slow and mild, with rates of improvement varying from state to state.

"Chart of the Day: The Uneven State Unemployment Recovery," theatlantic.com, May 20, 2011, Daniel Indiviglio