Unemployment Rates In Oregon And Washington Drop In February 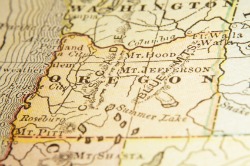 Oregon's economy took a positive turn in February with 9,800 new jobs and a 0.2 point dip in the jobless rate. However, the state needs additional jobs to drop the 10.2 percentunemployment figure into single digits. "I am hesitant to use the word 'recovery,'" Bill Conerly, a Lake Oswego economist and business consultant, told The Oregonian. "We are nowhere close to having regained all the lost ground. But we are moving in the rightdirection."

Oregon's outlying regions didn't fare as well, however, according to The Oregonian. Those areas lost a number of jobs last month, sinking the rural unemployment rate deeper into doubledigits. With nearly 218,000 individuals out of work, Oregon's unemployment rate is 1.3 points higher than the 8.9 percent national average. It has been in the double digits for 24consecutive months, the Clackamas Review reveals. That's one quarter shy of the 28-month record for double-digitunemployment set between 1981 and 1983.

Like its neighbor, Washington state's employment numbers also improved. After job losses were calculated, the state added a total of 800 new jobs in February, which bumped its unemploymentrate down 0.1 point to 9.1 percent, state officials reported to the Seattle PI. About 341,000 people remain jobless. Job growthoccurred in several areas including government (1,700 jobs), leisure and hospitality (1,600 jobs) and construction (3,900 jobs).

In response to the construction's industry growth, Dave Wallace, Washington's chief labor economist, told OPB News, "One of the things to remember about this sector, having been down so far, it's got a lot of ground tomake up. So that might be part of it. It could also be remodeling and foreclosures and so forth, but we really don't know exactly where it's coming from."