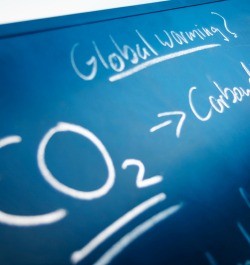 Climate change is becoming a growing global concern. Recent weather disasters, such as the severe flooding in New York, have drawn more attention to the issue. Even President Obama addressed the importance of reducing global climate change in his second inaugural address. While climate change has long been a topic of discussion for political leaders, it is now also becoming a prominent focus in higher education.

In a press release published on Tuesday, Unity College revealed that it has become the first college in the United States to integrate climate change curriculum into every one its disciplines, from conservation law enforcement to environmental writing. Also known as "America's Environmental College," Unity College has always emphasized advancement in ecological problem-solving. In December, it became the first higher education institution to divest from its fossil fuel investments. Climate change, however, did not become a priority until Stephen Mulkey became the school's president in 2011.

In November of 2011, Mulkey asserted the importance of tackling climate change in a statement quoted by Clean Technica: "We are running out of time. While our public policy makers equivocate and avoid the topic of climate change, the window of opportunity for salvaging a livable planet for our children and grandchildren is rapidly closing." Unity College is now addressing Mulkey's concerns through its curriculum.

While the environmental college is the first higher education institution to take a transdisciplinary approach to climate change, it has not been the only one to highlight the issue. According to a news release by the University of Hawaii at Monoa, Dr. Charles Fletcher, Associate Dean and Professor of Geology and Geophysics at the university, recently released the first undergraduate textbook to target the subject. The textbook, named "Climate Change: What the Science Tells Us," discusses the impacts of climate change on the ocean, terrestrial ecosystems, the water cycle, human communities, hazardous weather patterns, and potential future Earth systems. It also addresses such topics as the rising sea level, the human fingerprints of climate change, and greenhouse gases. Colleges and universities can use the textbook either as the sole foundation of a class or as a supplement to classes on broader environmental topics, such as meteorology, environmental science, environmental law, or oceanography and marine science.

Fletcher has been publishing research regarding such environmental matters as the effects of coastal hazards on human communities and the geologic history of sea level change for more than 30 years. He commented on the necessity of educating students on climate change in the news release: "Our climate is changing NOW in rapid and dangerous ways. But by and large, we are not teaching the current generation of students about the reality of this phenomenon. Without this knowledge, our ability to manage the impacts of a changing climate is limited."

As the press release stated, an educational background in climate change can better prepare students, regardless of their area of study, to tackle the challenge of mitigating climate change.