Universities Across The US Begin Recalling Students Studying Abroad In Japan 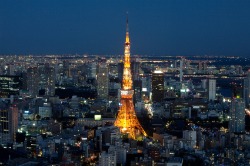 After days of warning their students studying abroad in Japan, American colleges and universities are urging and in some cases ordering students to return home. This follows the U.S. State Department Wednesday advising U.S. citizens to leave Tokyo because of the deepening crisis at the Fukushima Dai-ichi Nuclear Power Plant, resulting from the March 11 earthquake and tsunami.

While institutions of higher education have long fostered international study, they're now experiencing the downside, notes The New York Times. Schools with a foreign presence have a lot at stake, including their students' safety as well as their reputation and property.

Temple University is arranging a charter flight for any of the remaining 200 students studying at their Tokyo campus. More than 115 have already left, and between 15 and 20 others moved from Tokyo to other regions in Japan. University officials expect the flight to leave Japan on Sunday, Japan time. "The real tipping point for us was the U.S. government making its advisory," Kyle Cleveland, sociology professor, told The Inquirer. Temple's Tokyo campus, closed since the earthquake, is slated to reopen March 28, events allowing.

The University of Kansas recalled its 10 students in Japan; the University of Missouri did the same with its six students remaining there. Three MU students already have departed. Both schools offered to help pay for these students to evacuate. "University policy does not permit study abroad programs to operate in countries where State Department travel warnings have been issued," said Jill Jess, a KU spokeswoman, as reported by The Kansas City Star.

The University of California, one of California's two public university systems, is suspending its study abroad programs in Japan, bringing home the 49 students still there and telling 31 others not to return to Japan from their spring break locales. "This decision was not taken lightly and it is based on the need to ensure your safety, our first and foremost concern," Jean-Xavier Guinard, executive director of UC's education abroad programs, wrote in a letter to the students, according to the Los Angeles Times. Similarly, Cal State, California's other public university system, is evacuating its 45 students in Japan and holding back the 50 students scheduled to travel there soon.

Despite recent problems in Japan, international study will remain largely unaffected long term, said Allan E. Goodman, president of the Institute of International Education, a nonprofit, international education and training organization, per The New York Times. "Past experience has shown that study-abroad programs can be reinstated relatively quickly, and student enrollments can resume or even surpass previous levels," he added.

"UC and Cal State pull all students out of programs in Japan," latimes.com, March 17, 2011, Larry Gordon