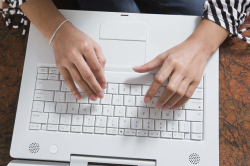 Social networks, such as Facebook and Twitter, are revolutionizing the way we communicate with one another. We are constantly texting, tweeting and updating statuses on Facebook pages. That said, it is no surprise that college campuses are turning to social media to recruit new students.

In a study conducted by Nora Ganim Barnes, Ph.D., Senior Fellow and Research Chair of the Society of New Communications Research and Chancellor Professor of Marketing at the University of Massachusetts Dartmouth, and Eric Mattson, CEO of Financial Insite Inc., shows that universities are embracing social media to better communicate with prospective students. The study, entitled "Social Media and College Admissions: Higher-Ed Beats Business in Adoption of New Tools for Third Year", reports that in 2009, at least 95 percent of colleges used at least one form of social media in their recruitment process. Additionally, the data also shows that colleges' adoption of social media outpaces both the Fortune 500 and Inc. 500.

However, despite the increasing popularity of social networking among universities, The Chronicle of Higher Educationreports that students prefer college visits and Web sites over social media. In another study Abe Gruber, director of marketing at Bloomfield College, found that while 40 percent of admissions offices use Twitter, only 15 percent of the 200 prospective freshmen surveyed expressed interest in using Twitter to learn more about college campuses. Gruber points out that Twitter typically attracts the 30 to 40 age demographic so most high school students are not active on the site. He also adds that faculty members "just hear [Twitter] as a buzz word. They keep hearing more and more and [think] it's the next big thing" when in reality, it is not utilized by most graduating seniors.

A recent blog entry by The Washington Post adds to Gruber's findings, saying that universities do post newsworthy information and updates via Twitter, but rarely use it to interact with potential students. Lauren Madrid, Electronic Communications Coordinator at St. Mary's University says, "I work in University Communications (PR) and use our Twitter account for branding." Ariel Carpenter, Director of Public Relations at the University of Southern California, says she uses Twitter to "provide [students] resources to address any admissions or transfer questions they may have". She directs students to the school's Admission and Financial Aid page where they can set up one-on-one meetings for more information.

While social media and the Internet are changing how students receive information, they still fall short as an effective tool for two-way communication. Most university faculty feel Twitter and other social media are excellent for researching or requesting more information, but encourage potential applicants to stick to campus visits, e-mails or phone calls.