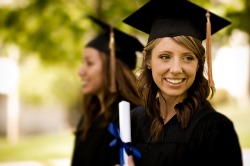 Some colleges and universities are offering accelerated degree programs to high achieving students who wish to finish their studies at a faster pace.

According to The Washington Post, the University of the District of Columbia is partnering with two local public schools to enable select groups of motivated students to obtain a bachelor's degree two years after graduating from high school.

Under the proposed program, students from the two high schools would begin UDC classes in their junior year, earning dual credit for high school and the university. By the end of their senior year, they would earn their high school diplomas. Two years later, they would finish their bachelor's degrees.

"Only the best, most motivated kids are going to be able to do it," said UDC President Allen Sessoms.

The expedited degree is part of a larger effort by UDC to attract high achieving students to the university. The program draws ideas from a similar initiative begun at George Washington University that places students in college classes at the start of their junior year. By the end of high school, the students have earned enough college credit to obtain associate's degrees. They then have the option of applying either to GWU's undergraduate program or transferring to another four-year institution.

"This will be a wonderful and efficient way for students who already have a bachelor's degree in another discipline to begin a second career in nursing," said Helen Melland, dean of the College of Nursing at MSU. "We expect that this will be a popular offering and already have many applications for the available slots."

Graduate schools are also instituting programs that will allow students to obtain multiple degrees faster than usual, the International Business Times noted. Columbia University School of Law has joined the ranks of Yale University and Northwestern University in offering a fast-track program that lets graduate students earn law and business degrees at the end of three years instead of the traditional four. Competition for program spots is expected to be tough because the prospect of finishing a year earlier will allow graduates to earn money to repay tuition costs.