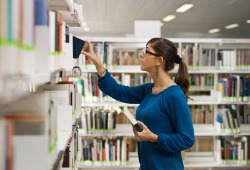 With technology changing the face of education, many university libraries have had to adapt and take on new functions. Some renovated facilities to create more space for studying, others added new technology for students to use. Many have also gotten rid of their massive book collections, which has drastically changed the meaning of what a library is. Stanford University's engineering library went digital and removed 85 percent of its books last summer. According to Inside Higher Ed, now the University of Denver is following suit, permanently moving four-fifths of its Penrose Library holdings to a storage facility about 10 miles from campus.

The plan is to transform the university library into an "Academic Commons", making it more welcoming for students to study or meet. According to the library's blog, when the new facility opens in December 2012, it will offer many features such as more comfortable work spaces; group study rooms in a variety of sizes; enhanced technology; a larger cafe with patio seating and increased natural light. However, it will also house just 20 percent of its current collection, which shocked many faculty members, reported Inside Higher Ed.

Originally, faculty members were told that 80 percent of materials would be returned to the renovated library, which was acceptable. But when it was announced last week that just 20 percent would be moved back, arts, humanities and social science professors--who rely on old-fashioned stacks for research--were angered. Many said they were not included in the renovation process when they should have been.

"You would never ask a scientist to get rid of his or her laboratory," said Annabeth Headrick, an art history professor. "But that's exactly what's being done to us."

Dean and director of Penrose Library Nancy Allen said in an email that the returning books "will comprise a teaching collection carefully built with the input of faculty, especially those in the social sciences and humanities who depend in both teaching and research on monographs as the key form of scholarly communication." The rest of the collection will remain in storage, but can be delivered within two or three hours if requested. Allen also told Inside Higher Ed that administrators would closely monitor the use of books to determine which ones should stay on campus and which should be sent to the storage facility.

In a related story, The Chronicle of Higher Education reported that many universities have also started to set up video game rooms, labs and archives in their libraries. With video games playing a key role in some classes--such as game design, media studies and even English--libraries have had to adapt.

"We have faculty who are doing stuff involved in video games, so the library needs to be doing something to support that teaching and that research," explained David S. Carter, an engineering librarian at the University of Michigan.

However, some critics question whether cash-strapped universities should be spending thousands of dollars on video games and equipment. At Miami University in Ohio students, faculty and staff got the green light to build a gaming facility. However, by the time the university received the money, the campus had been hit hard by budget cuts and the library alone lost 15 positions.

Still, experts argue that video games are important cultural artifacts and that if done right and with an overall mission, video game collections can be valuable in an academic setting.

"[Libraries] shouldn't just build that collection because it's hip," said Scott Nicholson, an associate professor in the School of Information Studies at Syracuse University.