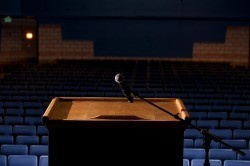 Former politicians and government representatives commonly speak on college campuses, and in most cases, these speeches proceed without controversy. Not so in the case of one former Secretary of State whose role in two U.S. wars is drawing protest from faculty and students at two prominent universities.

According to The Star Tribune, students and faculty activists at the University of Minnesota are pressuring the university to rescind an invitation to former Secretary of State Condoleezza Rice to speak on campus later this month as part of the Humphrey School of Public Affairs's "Distinguished Carlson Lecture Series." Protesters cite Rice's role in wartime activities during former President George Bush's administration and Rice's $150,000 speaking fee. The University Senate will vote next week on a resolution to withdraw the invitation.

"If the University is trying to represent itself as a global institution and really have its presence on a global scale, you have to think about how other governments and countries are going to view us," Students for a Democratic Society member Nick Theis told the Minnesota Daily, recalling Rice's role in approving torture during her tenure as Secretary of state.

Though students are perhaps among the most vocal critics of Rice's upcoming visit, it was actually a faculty member, Professor William Messing, who introduced the resolution to begin with. He told The Star Tribune that he is "cautiously optimistic" it will garner support.

Humphrey spokesman Kent Love-Ramirez told The Minnesota Daily that the school stands behind its decision to invite Rice to speak. He said Rice plans to discuss overcoming adversity as an African American woman who grew up in the southern U.S., where she faced discrimination, a topic he believes is consistent with the lecture series theme, "Keeping Faith with a Legacy of Justice: The 50th Anniversary of the Civil Rights Act of 1964." Nonetheless, Love-Ramirez said he firmly believes in students' "right to protest and [welcomes] it as an extension of the public discussion."

The university's College Republicans Co-Chair Adam Motzko told Minnesota Daily that he believes the school should continue to welcome guests of all viewpoints and political affiliations to speak on campus.

"Just because some people might disagree with some of the things [Rice] said or has said in the past, that doesn't mean she should be disqualified from speaking at the University," Motzko said.

The University of Minnesota is not the only campus grappling with controversy surrounding a Rice visit: MSNBC reports that Rutgers University has announced that the former secretary will be its 2014 commencement speaker despite protests from students and faculty upset about Rice's role in the 2003 U.S. invasion of Iraq. Earlier this month, University President Robert Barchi published an open letter re-affirming the school's decision.

"We cannot protect free speech or academic freedom by denying others the right to an opposing view, or by excluding those with whom we may disagree," wrote Barchi. "Free speech and academic freedom cannot be determined by any group."