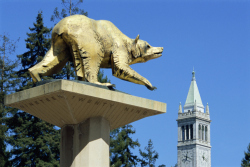 The University of California admitted more freshmen than ever for the upcoming 2011-12 academic year, including more applicants from other states and countries, reported the Contra Costa Times.

After receiving a record 106,186 applications, UC offered admission to 72,432 freshmen, an increase of 4,100 over last year, according to UC Newsroom . With the exception of two campuses--Riverside and San Diego--all universities admitted more students than last year.

Although California residents made up 81 percent of all admitted students, the greatest growth in admitted applicants was among non-residents, who pay more in tuition than in-state students. Non-resident students made up 18 percent of the upcoming freshmen class. Last year, non-residents accounted for 14 percent and 11.6 percent in 2009. According to the Los Angeles Times, UC Berkeley and UCLA admitted the highest percentage of non-Californians, even though they were the most selective UC campuses--31.2 percent and 29.9 percent, respectively. These out-of-state students pay $23,000 more a year than California residents, money that the system is in dire need of.

UC interim director of undergraduate admissions Pamela Burnett acknowledged that many campuses were forced to deny admission to highly qualified students due to financial circumstances.

"The reality is UC does not have a capacity problem. It has a funding problem," Burnett said as quoted by UC Newsroom. "If the state provided adequate funding for enrollment growth, there is no doubt that even our most selective campuses would accept more California residents."

Some have criticized the UC for enrolling more out-of-state students and denying qualified California residents, noted the Los Angeles Times.

"We are moving in the opposite direction of where we need to go," said William Tierney, director of USC's Center for Higher Education Policy Analysis. "We need to be increasing capacity and participation in higher education, and the public sector is decreasing that. I understand why they are doing it, but it's not in the best interest of the state."

According to UC Newsroom, the final numbers for the entering freshmen class won't be known until May 1, the deadline for students to accept. Because most out-of-state students end up not enrolling in a UC, the university expects non-resident enrollment to remain under 10 percent, which is much lower than out-of-state enrollment at other public universities across the country.