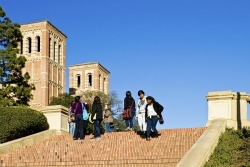 In total, UC offered fall admission to 61,443 California residents and 18,846 students from other states and countries. Last year, 13,144 non-resident students were offered admission, and two years ago, 9,552 offers went to non-Californians.

Students from outside California pay an additional $23,000 per year than those within the state. Recruiting non-resident students has thus become an important revenue strategy for UC, since the state has drastically reduced its higher education funding in the past few years.

"We have the capacity to educate many more students at our campuses," acknowledged Kate Jeffery, UC's interim director of undergraduate admissions, in a press release. "What we don't have is the funding to admit more California students."

As the Los Angeles Times reported, eight of the nine UC campuses increased the number of admissions offered to out-of-state and international students. The only exception was UC Berkeley, which had generated controversy last year after it was announced that 30 percent of the freshman class hailed from outside California. This year, Berkeley's offers of admission to out-of-state students decreased by 12.5 percent.

UC officials pointed out that it was still unclear what the final enrollment numbers would look like, since out-of-state students typically decline offers of admission more than California residents. Moreover, officials said that UC expects to remain within its 10 percent cap on non-California students.

According to the Los Angeles Times, Jeffrey noted that the proportion of out-of-state undergraduates at UC "is still very small and certainly small compared to some other public institutions in other states." She added that students from outside the state help to increase diversity on campuses.

Nevertheless, plenty of California residents are clearly disturbed by the thought that residents are being displaced at UC by higher-paying students from outside the state. "I don't like that at all," said Gov. Jerry Brown, who was quoted by the SF Gate, when he was asked about UC's record number of non-resident admissions.

Patrick Callan, president of the think tank Higher Education Policy Institute, agreed. "I think it is a short-term benefit that really does compromise the university in the long term," he told the LA Times. He explained that UC will ultimately be less likely to receive increased funding from the state in the future, because California residents and lawmakers will feel less connected to the university.