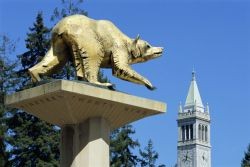 According to the Los Angeles Times, California's fiscal crisis has already forced UC to raise tuition, layoff staff and cut class offerings; yet, the system is still struggling to make ends meet. As a result, some are proposing differential tuition, which would allow individual campuses to set their own tuition rates.

Though differential tuition is something new to California, many other states have used the practice for years. At the University of Texas at Austin, for instance, basic tuition and fees in the fall will be nearly $4,900, whereas the El Paso campus will charge about $3,500.

"All of it is based on the ability to pay, for the population they serve. It has to do with what the market can bear," said Pedro Reyes, the University of Texas system's associate vice chancellor for planning.

UC Berkeley Chancellor Robert J. Birgeneau suggested that regents set a midpoint for undergraduate tuition and allow universities to set their tuition rates 25 percent above or below that amount.

Supporters of varying tuition rates argue that it makes sense and that it would help bring in additional funds that campuses could then share.

"If one of the UC campuses really works hard to bring up their academic standards and they have a higher rating like UCSB, I think that that's a higher value and they should be able to charge more for that," said Rosemarie Chiovari, a parent of two UCSB alumni, to KSBY News.

Opponents, however, say differential tuition is elitist and would not only undermine the unity of the UC system, but could also have a negative impact on some campuses' reputations, reported the Los Angeles Times. GOOD pointed out that while the system could benefit from rich families who are willing and able to pay more for more prestige, varying tuition undermines the ideal that quality education is a right or at the least, something that can be earned through hard work and perseverance.

UCSB student Michael Amlani told KSBY News, "I think what would happen is people would just start going to UC Riverside as opposed to UC Berkeley because of tuition cost and then you would prevent people from getting a better education by charging them more money."

According to the Los Angeles Times, UC's Commission on the Future did not fully endorse varying tuition, but recommended that UC find ways to implement variable fees in case the state's fiscal problems worsen.

"The New Role of Money in Admissions: Is This the End of the Meritocratic Ideal?" good.is, May 11, 2011, Liz Dwyer

"University of California weighs varying tuitions at its 10 campuses," May 9, 2011, Larry Gordon