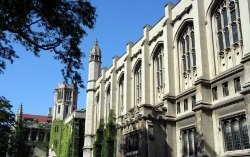 In an effort to help Chicago high school graduates finish their college education debt-free, The University of Chicago and Chicago Mayor Rahm Emanuel have launched a new program called UChicago Promise, according to The Chicago Maroon. The new program aims to replace college loans with grants for all native Chicago students, waive the $75 application fee for them, and create a new admissions academy to aid in the college application process.

"A college degree makes a huge difference in the lives of students and the trajectory of families," University of Chicago President Robert Zimmer said in the Chicago Tribune. "Students from the city of Chicago should be aiming very high to fulfill their potential. We want them to attend the best school -- the best college possible -- that suits their needs, interests and abilities."

The program announcement follows other recent efforts by Emanuel to improve college accessibility for area high school graduates. One study showed that just 27 percent of Chicago high school students who met the requirements to attend selective colleges actually enrolled. To help improve that number, UChicago Promise aims to locate all relevant scholarship information under one website, making it easier to find out about the various opportunities. According to The Chicago Maroon, preexisting scholarships, such as the Neighborhood School Program, the Collegiate Scholars Program and others available through the University of Chicago higher education system, should now be conveniently grouped together.

The admissions academy to be established through UChicago Promise should offer workshops on essay writing, financial aid and other topics relevant to college success. The academy will be available to all students, however, and not just those planning on attending the University of Chicago, according to the Chicago Sun-Times.

"We all know that a college degree can help open doors and provide long-term opportunities," said Sonya Malunda, the University of Chicago's senior associate vice president for community engagement, in the Chicago Tribune. "UChicago Promise gives us yet another opportunity to partner with our city to help young people really reach their full potential in attending and completing college."

The new plan takes effect this year for those applying to the University of Chicago, but does not impact those already attending. That means approximately 50 or so freshman students from Chicago are not able to take advantage of UChicago Promise. However, The Chicago Maroon confirmed that more than a third of these students are on full scholarships offered through the Chicago Police and Fire Scholarship.

The launch of UChicago Promise ties in with other education initiatives recently launched by Emanuel. In May, a joint project of Microsoft and DePaul University, a Catholic school located in Chicago, converted an area high school to one focused on science, tech, engineering and math, or STEM, based curriculum. Loyola University, another Catholic institution in Chicago, also made recent steps to set up an advanced International Baccalaureate program at an area high school. In exchange for these offerings, Emanuel has helped the institutions to fast-track their five- and 10-year capital improvement plans, according to the Chicago Sun-Times.