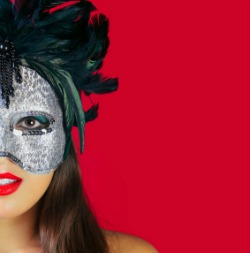 For some college students, risque or otherwise tongue-in-cheek Halloween costumes are virtually tradition. Some guises perhaps amount to little more than poor choices, but others -- especially those playing on cultural stereotypes -- might be downright offensive. Some colleges, fed up with the trend, want to put a stop to these questionable get-ups once and for all.

The University of Colorado in Boulder has launched a new poster campaign asking students to reconsider donning culturally insensitive Halloween costumes this year, reports The Huffington Post. The poster campaign, "We're a culture, not a costume," began at Ohio University and includes images of students of various ethnicities or social classes alongside photos or portrayals of offensive costumes. One shows an Asian student holding up a photo of a woman in a geisha costume, for instance while another depicts a caucasian student dressed as a "hillbilly." Randy McCrillis, director of CU's Center for Multicultural Affairs, suggests such depictions alienate members of the school's increasingly diverse student body.

"It's really a campaign to raise awareness and to create a better sense of community for all of our students and how to have a respectful and inclusive community for all students here at CU," McCrillis told Daily Camera, the college's student newspaper.

There is a precedence of CU Boulder students wearing what some might consider to be offensive or demeaning costumes. According to a University of Colorado Boulder release announcing the campaign, the campus community has seen past students dressed in blackface or wearing serapes. Students have also chosen to wear costumes depicting "overly sexualized" cultural identities, and have hosted "offensively-themed parties that reinforce negative representations" of various cultures. Other colleges have struggled with similar situations. The Huffington Post reports that a Penn State sorority drew criticism last year for its "Mexican-themed party," photos of which showed members dressed in sombreros and holding up signs promoting certain stereotypes.

Perhaps it is no surprise, then, that colleges are actively trying to ward off these difficult situations. In addition to CU-Boulder and Ohio University's poster campaigns, The Huffington Post reports that the University of Minnesota-Twin Cities has also asked students to avoid wearing costumes that "perpetuate racial, cultural and gender stereotypes."

"There's definitely a wide range of things that could offend people that you don't even realize that you're doing," Kevin Patterson, a fifth-year CU-Boulder student studying political science and ethnic studies, told Daily Camera. He said he would encourage his peers to consider how their costumes might depict someone else's culture, and what that might mean. "We're trying to point out the unintended outcomes from their actions. If you're degrading someone's culture in a joke, think about how that makes them feel."