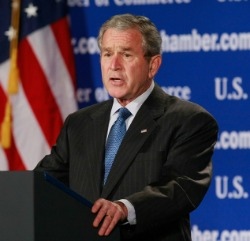 Glitzy fundraising events can help colleges attract valuable publicity and donations -- especially when they feature a prominent public figure. When that guest is so politically polarizing that he draws protests, however, what should be an upbeat annual shindig can quickly turn sour. Such is the case for one Denver university.

The University of Denver's Josef Korbel School of International Studies has announced it still intends to honor former President George W. Bush at a fundraising dinner in September, but not for "improving the human condition" as originally planned. The Daily Caller reports that Korbel faculty, students and alums protested the humanitarian nod as soon as it was announced, circulating an online petition and creating a Facebook page opposing the award.

"Former President George W. Bush left behind a legacy of human rights abuses, including the torture of detainees in extraterritorial jails, preemptive war, domestic surveillance programs and other egregious actions that deleteriously impact the human condition," Christine Hart, an alum of the college, wrote in the online petition signed by more than a thousand people, as reported by The Daily Caller.

According to Inside Higher Ed, Korbel holds a fund-raising dinner each year in which a prominent figure speaks and is honored with an award. It is a critical event for the school, which charges thousands of dollars for each table of 10. This year the school invited President Bush to speak. Christopher R. Hill, dean of the school, served in Bush's State Department and as ambassador to Poland and South Korea. When the school sent out invitations to the event, students, professors and alumni protested.

"It's been mostly just a lot of surprise," Seth Masket, associate professor of political science, told The Colorado Independent. "Why Korbel sought out to do this and honor Bush in this way -- it all seems very unusual."

The school defended its choice. A spokeswoman for the university told Inside Higher Ed that past honorees came from a diversity of political views, and that President Bush was "an obvious choice" given that "he is the 21st century's first two-term president." Hill, meanwhile, said in an email that the school still plans to present the former president with an award, but is leaning toward calling it "the global service" award." He maintained that having the former president attend is a "great honor."

Masket told The Colorado Independent that he sees the value in bringing such a high profile figure to campus for fundraising purposes, but still has concerns. "An award for improving the human condition -- that's a fairly controversial statement to apply to President Bush," he said.

Previous DU honorees include former U.S. Secretaries of State Condoleezza Rice and Madeleine Albright, as well as former U.S. Army chief of staff George Casey, reported The Daily Caller. Inside Higher Ed noted that Rice was a DU student who considered Bush a mentor, and the school itself is named after Albright's father.