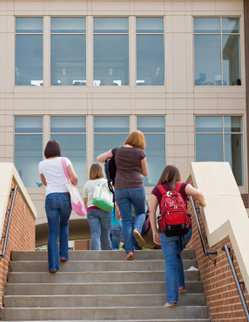 In an effort to alleviate crowded facilities, the University of Florida, is considering a proposal that would give incoming students the option of taking classes during the spring and summer semesters and skip the fall semester, reported Inside Higher Ed.

Joseph Glover, the university's provost, said, "U.F. is a large institution and, basically, in the fall semester the Gainesville campus is full to capacity. We do have extra capacity in the spring, after winter graduation, and lots of capacity in the summer...I think there would be a market for students who would be interested in doing this for a variety of reasons."

The university has nearly 6,400 first-time freshmen. If the spring-summer option is offered, the school would be able to expand its incoming class by about 250 students. The program, which would involved up to 1,000 undergraduates noted The Gainesville Sun, would give applicants the option of choosing fall-spring classes only, spring-summer only or either. Inside Higher Ed stated that students on the spring-summer schedule would not be able to take classes on campus during the fall, but could study abroad, take distance classes or do a fall internship. The schedule would apply for the entire time a student is at the university.

According to The Gainesville Sun, most schools currently follow a traditional schedule which allows students to take time off during the summers. In the past, the break was needed so that students could work on farms. If the pilot program, which would happen in 2013 at the earliest, is a success, UF and other universities may move to a year-round calendar where there would be an equal number of students on campus each semester.

In order for the university to offer such an option, lawmakers would have to change a current state law that prohibits universities from requiring students to take summer classes if they bring at least nine credits of accelerated courses, such as advanced placement classes, which most freshmen do because of the university's high admission standards. If the law does not change, Glover stated the option could be offered to transfer students only. "One way or another, in 2013 we would launch a program," he said.

The Miami Herald reported that the university is also considering another option: allowing full-time students to pay a flat rate per semester to encourage students to take more units and, thus, graduate sooner. The pricing structure, called block tuition, is already the standard at private universities and a few public universities including the University of Texas at Austin and the University of California at Los Angeles.

Although the exact amount has not been decided, many worry that it may put pressure on students to take more units than they can handle in a semester. Spokeswoman Maydel Santana-Bravo assured The Miami Herald that the proposal would be carefully evaluated. She added, "At the moment we are focused on maintaining quality and improving the student experience."

"No class in fall for some in UF pilot program," gainesville.com, September 15, 2010, Nathan Crabbe