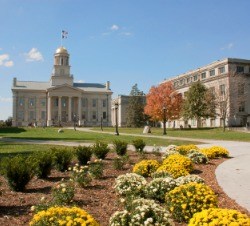 In an effort to create a welcoming environment as well as to gather data, the University of Iowa has begun asking its undergraduate applicants questions about their sexual orientation and gender identity.

According to The Chronicle of Higher Education, these changes have made UI the first public university to ask applicants such questions. To date, it is the second U.S. institution of higher education to move in this direction—Elmhurst College was the first to do so last year.

As reported by Inside Higher Ed, the university made two changes to its UI application. One is the addition of a transgender option to the dropdown menu for gender. The second is an optional question on sexual orientation (“Do you identify with the LGBTQ community?”), which appears in a section that asks other optional questions about family connections to the university, parents’ educational background, and applicants’ interests in campus programs such as ROTC or organizations such as fraternities and sororities. Officials believe that the changes will convey a positive message to its applicants.

“The new LGBT question on our undergraduate application reflects our foundational commitment to inclusion of all students, no matter what their origin or orientation,” said Michael Barron, assistant provost for enrollment management and executive director of admissions, in Iowa Now.

Furthermore, the questions will allow officials to gather data regarding LGBT enrollment and retention rates as well as provide those who answer yes with personal outreach and more information on campus groups and resources. According to The Chronicle of Higher Education, the questions will in no way be used in admissions decisions.

Quentin Hill, a political science major and chair of the main group for gay students and secretary of the gay fraternity, told Inside Higher Ed that LGBT students should be contacted early on so that they can learn about their options. In Iowa Now, Hill added that he wishes this had been available when he was applying to UI.

“Upon arrival at this university I had no information available about what type of LGBT resources and community were available, and I had to do the research myself,” he said. “It would have been nice to have the university offer me some of these resources before arriving….”

As The Chronicle of Higher Education noted, UI’s move is significant, given its location and the fact that it is a high-profile university. The hope is that more colleges will follow suit. Some, however, will remain hesitant. Susan Tree, director of college counseling at the Westtown School, for example, pointed out that some students might not be ready to face such questions.

Last year the Common Application’s board of directors shared a similar sentiment when it decided not to add an optional question regarding sexual orientation. The board also noted that the Common Application has less-direct ways for LGBT students to identify themselves, such as an “LGBT” option in the dropdown menu for activities.

According to Inside Higher Ed, Jake Christensen, senior admissions counselor at Iowa who first proposed the idea, emphasized that students will not be forced to answer the questions.

Hill agreed: “This is no different from when race is asked on an application.”

“U. of Iowa Will Ask Applicants if They ‘Identify With’ the Gay Community,” chronicle.com, December 12, 2012, Eric Hoover