University Of Nebraska At Kearney Defends Itself Against Housing Discrimination Lawsuit 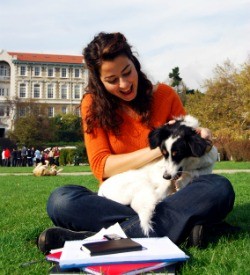 Fido may be man's best friend, but according to some college officials, he has no place in student housing, even as a medically-prescribed "therapy" pet.

On November 23, the U.S. Justice Department filed a housing discrimination lawsuit against the University of Nebraska at Kearney for denying former student Brittany Hamilton's request to keep her therapy dog in her off-campus, college-owned apartment reported KearneyHub.com. Hamilton suffers from depression and anxiety, and the 4-pound miniature pinscher named Butch, prescribed by a nurse practitioner, would calm her during panic attacks. The lawsuit calls for a court order that would prohibit future discrimination, monetary damages and a civil penalty.

"We are going to be contesting the charges of discrimination in court," said Vice Chancellor of University Relations Curt Carlson.

According to Inside Higher Ed, UNK has no written guidelines specifically addressing animals living with disabled students, but complies with the guidelines set forth by the Americans with Disabilities Act. The problem: New ADA amendments don't recognize animals that provide emotional support as "therapy animals".

The lawsuit contends that while the ADA does not specifically address the issue of therapy animals, UNK should comply with the Fair Housing Act, which requires housing providers to give reasonable accommodations for those with disabilities.

Also at issue is how UNK went about reviewing Hamilton's request. According to KearneyHub.com, Thomas Perez, assistant attorney general for the Civil Rights Division at the Justice Department, pointed out that the Fair Housing Act ensures that those seeking an accommodation do not have to disclose "overly intrusive and invasive" information.

Yet if a student needs special accommodations, UNK's Psychological Documentation Guidelines requires that he or she provide information regarding diagnosis, treatment, prescribed medication and even his or her doctor's professional qualifications.

Despite complying with the university's policy, Hamilton's multiple requests were denied. UNK officials argued that the Fair Housing Act didn't apply to university-owned apartments and that Hamilton wasn't able to show documentation that the dog was indeed a service animal.

Other colleges and universities will most likely watch the case closely as requests like Hamilton's are becoming more common. University of Nebraska at Omaha Disability Services Coordinator Meribeth Jackson told the Omaha World-Herald that she has seen an upswing in requests for accommodations among students with emotional or psychological disabilities. As support for these students grows during the K-12 years, it can be expected that more will be found in colleges.

As Inside Higher Ed pointed out, UNK administrators considered the potential consequences of granting Hamilton's request, which some experts argue is not fair.

"I think that the sense is that we'll see more and more animals showing up on campuses, and that may be an unsupported fear," said Jane E. Jarrow, a consultant in disabilities and higher education and former AHEAD executive director, to Inside Higher Ed. "Whether or not it will truly open the floodgates remains to be seen. My guess is not."