University Of Vermont To Stop Selling Bottled Water In 2013 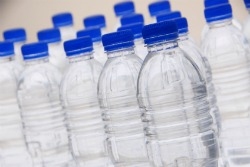 In an effort to be more environmentally-friendly, the University of Vermont plans to stop selling bottled water on campus by 2013, The Chronicle of Higher Education reported.

In preparation, water-bottle filling stations will be set up around campus that allow students to simply fill up their own water bottles in lieu of needing to make a purchase. As many as 75 water fountains on the campus will be converted to water refilling stations, Reuters reported. Those conversions will cost about $300 a piece, according to The Vermont Cynic.

The changes are the result of a student-led effort.

"We wanted people to think about why they're purchasing bottled water," Greg Francese, president of the school's Vermont Student Environmental Program, or VSTEP, told The Vermont Cynic. "The way we've done that is basically just by educating people about why you can get virtually the same product for free out of a water fountain."

Specifically, the sale of water bottles on campus will stop on January 1, 2013. The move means that the school will not renew its contract with Coca-Cola, which had sole rights on campus and did about 1.1 million bottled-beverage sales there annually, according to The Chronicle. That contract, which expires in June, generates more than $480,00 in revenue for the school each year. University officials have indicated that some of that loss could be made up by enacting new contracts with other vendors, The Chronicle reported.

"This action is not likely to save the University any money, but hopefully students will save money by having better access to chilled drinking water for which they do not have to pay," said Richard Cate, vice president of finance and administration, to The Vermont Cynic.

According to a press release, the plan has caused a reaction from the International Bottled Water Association, or IBWA. The IBWA argued that the school is sending a mixed message and that the water bottle ban will restrict students' freedom of choice.

"The university has failed to understand that bottled water is most often an alternative to other packaged drinks, which are often less healthy, and is not necessarily an alternative to tap water," Chris Hogan, IBWA vice president of communications, said in the press release. "Research by owners of vending machines show when bottled water is not available in a vending machine, people choose other packaged beverages, which may contain sugar, caffeine and other additives. They don't necessarily go looking for a drinking water fountain."

But Mikayla McDonald, former president of VSTEP, said that the need for bottled water is a recent creation. McDonald told The Vermont Cynic "that there was essentially no need or want for it until bottled water companies started spending billions of dollars on advertising."

The University of Vermont is not alone in its actions; other U.S. schools have terminated or limited the sale of bottled water on campus in recent years.