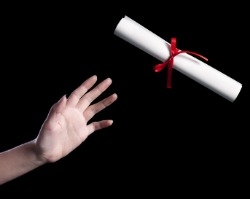 The University of Wisconsin will begin offering a new type of bachelor’s degree this fall—one that does not require students to take a single class offered by the institution.

According to a University of Wisconsin press release, the program, called the UW Flexible Option, is a competency-based, self-paced program, which will allow students to earn college credits or a bachelor’s degree by demonstrating their mastery in a given subject area. The program is currently in pilot phase and the university will offer full scholarships to the first 100 students to enroll.

The Wall Street Journal reported that the University of Wisconsin is the first public university system to separate classroom learning and awarding degrees by offering this competency-based degree program. With the exception of clinical or practicum work for certain degrees, no class time is required. Students, however, can take advantage of MOOCs offered by companies such as Coursera, edX and Udacity in order to demonstrate their competency through online assessment. Since the program does not take into consideration class time or even credits, it is ideal for students who can demonstrate knowledge based on real world experience as well as those who already have some college credits, but never finished their degree. The Wall Street Journal noted that approximately 20 percent of Wisconsin adults have some college credit, but not a degree.

“I have all kinds of credits all over God’s green earth, but I’m using [the program] to finish it all off,” explained David Lando, a 41-year-old computer consultant in Milwaukee who recently enrolled in the Flexible Option program.

Costs for online assessments have not been determined yet; however, university officials told The Wall Street Journal that it would be “significantly less expensive” than full-time in-state tuition. Faculty who normally teach the subject will write all assessment tests and related coursework.

While MOOCs have garnered attention for revamping higher education, The Chronicle of Higher Education noted that this new competency-based model is worth recognizing as well. The University of Wisconsin may be the first to offer such a program, but two other traditional universities—Northern Arizona and Southern New Hampshire—are also experimenting with similar concepts. Officials at these three institutions argue that programs based on knowledge rather than classroom time is the only way to alleviate the backlog of students who have credits but have not finished to earn a degree.

Some, however, recognize the great potential of such an experiment, but are concerned that the program may not emulate the standards of a traditional degree.

“There has got to be very rigorous documentation that it lives up to the quality of that name,” stated Mark Cook, an animal-sciences professor and chairman of the university committee for the faculty senate at the University of Wisconsin Madison campus.

Still, many working adults, including Wisconsin Governor Scott Walker, are optimistic about the program.

“I think it is one more way to get your degree. I don’t see it as replacing things,” said Governor Walker to The Wall Street Journal.