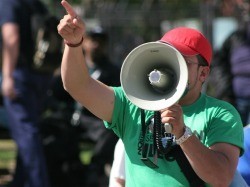 Budget woes have forced many colleges to consider severe measures, including slashing academic programs or raising tuition. The University of Southern Maine had another solution, reported Inside Higher Ed: Laying off several tenured faculty members. The announcement drew national attention and local protests, prompting University President Theodora Kalikow to reverse her decision. Not everyone will emerge unscathed, however, as several staff positions and academic programs remain on the chopping block.

This March, USM had plans to cut an additional academic program and lay off a dozen more faculty members in order to help overcome a $14 million budgetary deficit. Susan Feiner, an economics professor at USM, expressed concern that the university's decision would set a national precedent for laying off tenured faculty. In a grievance letter filed on Thursday on behalf of 11 professors, a campus union further suggested that the layoffs would disproportionately impact women, ethnic minorities and lesbian professors.

Christy Hammer, a sociology professor and president of the local chapter of the Associated Faculties of the University of Maine, commented on the university's situation to Inside Higher Ed, stating, "Maine was too poor to be the test case for the dismantling of tenure. It was like spaghetti they just threw at the wall -- some people's lives, some tenured faculty in the prime of their life."

The controversy ignited protests from a group called Students for #USMfuture, reported The Portland Daily Sun. The group staged a solidarity rally, teach-in and march on Thursday in downtown Portland, where they chanted things such as, "Stand up, fight back, education is under attack." According to Inside Higher Ed, the layoff announcement and subsequent protests attracted national attention, too: prominent economist and Princeton University professor Paul Krugman penned a column for The New York Times supporting the union, while the American Association of University Professors sent Kalikow a four-page letter of its own questioning whether the university's financial situation really justified the layoffs.

Kalikow announced at a USM Faculty Senate meeting Friday that she had changed her mind just moments before and would retract her decision to lay off the affected faculty members, reported the Portland Press Herald. The unexpected change of course drew applause from attendees.

Some faculty positions may be spared for now, but Inside Higher Ed warned that other planned cuts are still on the table, including the elimination of 34 staff positions and three academic programs (plus their seven faculty members). Nonetheless, university spokesman Bob Caswell told the publication that the president is now committed to "making sure the faculty and administration work more closely together to find solutions to (USM's) budget challenge." The Faculty Senate has already submitted a list of 27 proposed money-making and -saving ideas, including voluntary pay decreases and the loss of several lower-level administrative jobs.