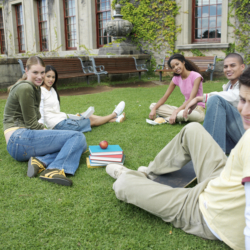 The Chronicle of Higher Education reported that more and more universities are exploring ways to integrate the Apple iPad into their curriculums. The latest is Oklahoma State University, which will begin a pilot program with roughly 120 students in two courses within the School of Media and Strategic Communications and the Spears School of Business this fall. "We're going to be evaluating what we need to do to fully integrate the tool into the classroom," said Bill Handy, visiting associate professor at the School of Media and Strategic Communications.

In the last couple of months, a number of colleges have announced plans to distribute the iPad to students. According to Ars Technica, the Illinois Institute of Technology will be giving all incoming freshman--some 550 students--an iPad as part of a technology initiative to enhance curriculum. Because freshmen are required to take several introductory courses, this will ensure that everyone has the same hardware and software.

Seton Hill University will be giving all freshmen undergrads a 13" MacBook Pro and an iPad in an effort to equip students with the technological and learning tools they will need while in school and after graduation. George Fox University will be giving their incoming freshmen a similar option: students will have the choice of an iPad or the school's traditional offering of a MacBook Pro. The university has supplied incoming freshmen with a MacBook for more than 20 years, but decided to give students a choice this fall since educators and students are still figuring out exactly how the iPad will fit into higher education. "At this time, we realize there are a number of uncertainties...It would be reckless to make a switch and only offer the iPad...But by doing this, we're opening the door to innovation," said Greg Smith, George Fox University's chief information officer.

According to Ars Technica, North Carolina State University will also offer 30 iPads that students and faculty can loan for up to four hours. The University of Maryland will give an iPad to 75 honors students enrolled in the Digital Cultures and Creativity living and learning program. The device will be the main tool for content delivery and instruction. Students will also learn how to develop their own apps.

Students at Reed College, who disappoved of the Kindle DX during a pilot program this past fall, will compare the iPad to traditional textbooks. Educators believe the iPad will be well-received.

Campus Technology also reported that graduate students at Duke University's Global Health Institute will test how the iPad can be used to increase field research efficiency in low-resource settings. "With an iPad a student may collect, organize and display data while in the field, allowing them to immediately engage in analyzing and interpreting that data when and where it has greatest meaning," said Marc Sperber, who is the main consultant for the project.

ECampus News reported that the iPad will also help students save money. 25 anatomy and physiology students at Houston Community College will participate in a pilot program where they will have access to electronic textbooks. Students pay about $200 per traditional textbook, which means that they will save almost $1,000 per semester.

All the schools listed above reported that they were excited to experiment with the iPad and predicted that the device would greatly enhance students' learning experiences. ECampus News stated that the iPad would be well-received because of its vast library of educational apps and its familiarity. "It's much more than just an eReader that people have seen and used before. [Apps] are what will propel the iPad past other [devices]," said Nick Smerker, an instructional technologist at Washington College in Chestertown, MD. He also added,"...If you've ever used an iPod, you already understand how [the iPad] works."

Ars Technica added that the iPad comes with a number of accessibility features for vision-impaired users, making it even more appealing. However, like the Kindle, the iPad suffers from issues with multitasking capabilities. Apple's iOS 4 update should help alleviate those problems.

"iPad goes under the gauntlet at universities this fall," arstechnica.com, July 21, 2010, Chris Foresman

"Students will get choice: iPad or MacBook," georgefox.edu